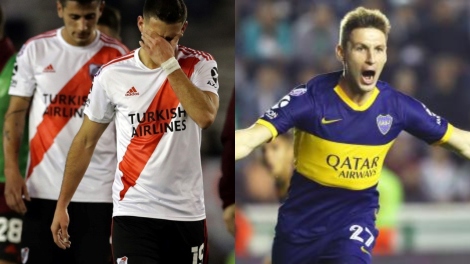 In the scheme of things neither River Plate’s defeat to Talleres nor Boca Juniors’ victory over Banfield on Sunday evening mean a great deal. Both sides have to finish their respective jobs in the Copa Libertadores this week with positive results pushing the two enemies together once more in what will be a colossal semi-final and before that the Estadio Monumental hosts a Superclásico for the first time since that day when the pair meet in the Superliga next Sunday.

Those results could make or break both clubs’ seasons and yet it will be Boca with a slight spring in the step after holding on for victory away to Banfield to go top of the table at this early stage in the season.

That is not to say that either side played particularly well on Sunday. Franco Soldano scoring his first Boca goal after 19 seconds handed Gustavo Alfaro’s side a dream start but it was Banfield who dominated from there on and will wonder how they came away with nothing.

While River slipped back into old habits, making changes to the team in between Libertadores matches and suffering defeat as a result.

A side boasting Franco Armani, Javier Pinola, Enzo Pérez, Ignacio Scocco, Lucas Pratto and debutant Paulo Diaz should still have been enough for River and after demolishing Racing 6-1 last week it looked as though Marcelo Gallardo’s side would this year balance their commitments.

They still might of course but the manner in which they are were second best to Talleres was so similar to the performances around last year’s Libertadores run-in which cost River any kind of Superliga challenge.

Nahuel Bustos had already gone close when he burst past Javier Pinola and clipped the ball beyond Franco Armani to open the scoring just after the hour mark and although River applied some pressure in the closing stages Talleres goalkeeper Guido Herrera had little to do.

In fact across the two games, the busiest keeper was undoubtedly Esteban Andrada. Boca may have taken the earliest of leads at the Estadio Florencio Sola but they survived enormous pressure to maintain a clean sheet.

Andrada tipped a Juan Álvarez effort onto the post and could only watch as Sergio Vittor thumped a volley against the crossbar as the Boca goal lived a charmed life.

Agustín Almendra was sent off in the 77th minute to only add to the pressure on Boca and at the Monumental Javier Pinola talked his way into an early bath. Both players now ruled out of next Sunday’s Superclásico but Pinola certainly the greater miss.

Boca sit top of the Superliga with River three points behind and in this short season, neither can afford to drop too many points over the coming weeks if they intend to challenge. However, the focus is clear and whoever progresses further in the Libertadores will likely see that as victory in itself.