“How was the dentist?” I asked Vanesa Santana on August 22 after she returned home from another checkup. The 28-year-old still has another six months left with her braces on. When living in Colombia, she finally had the opportunity to fix her teeth. Growing up in a poor neighborhood in Argentina, it was an expense her family could never afford.

On the football field, Vanesa is often described as a warrior and gladiator. Her style of play has been compared to Javier Mascherano. She lays her body on the line to fight for every ball. For Vane, it is a case of football imitating life. She grew up with nothing and since birth has had to fight for everything she has, nothing has been handed to her.

Vane was raised in Villa Celina, a poor and humble town just outside of Buenos Aires, in the Jose Hernandez neighborhood that still to this day has all dirt roads. “It is a neighborhood that has completely been ignored by the government.” Vanesa is the youngest of five siblings. She grew up without a father and her maternal grandparents passed away when she was young. The responsibility of providing for the children fell completely on to the shoulders of her mother.

This required her mom to work two jobs. “In the morning she would work at a restaurant and at night she worked in another family’s home. She was almost never around because she always had to work. The five of us took care of each other and did everything together. But we knew our mom had to work so that we could have food to eat.”

At the age of four she started playing football. She began playing with the neighborhood boys’ team – because well, in Argentina, football was a boy’s game. As the lone girl on the pitch, “People said millions of things to me, but I never paid any attention to it. All I cared about was my goal of playing professional football and I stayed focused on that goal. It serves no purpose to get angry. We all make mistakes and it’s my job to forgive.”

It wasn’t until Vanesa was 12 that she finally played football with other girls. When she was 14, she tried out for Boca Juniors and was invited to join their squad. For a family of Boca fanatics, it was the dream of a lifetime. “Ever since I can remember, when I was five or six years old, I already began saying that my goal was to play for Boca’s first division team. But I never got to play professionally for Boca and I never got to play in the Bombonera.”

Until recently, women’s football in Argentina has never been professional. For the first time this upcoming season, first division clubs are required to pay, not all, but some of their players. For Vanesa, Boca gave her a shirt to wear and a team to play with, but everything else, she provided for herself. “I would leave my house, travel by bus for two hours, practice for two hours, then travel back home by bus for two hours.”

If you have ever been on a bus in Argentina, it’s the furthest thing from a relaxing commute. The buses are overcrowded and more than half the people have to stand up. Everyone is squished against one another. “I would practice and then have to stand up on a bus for two hours – I came home exhausted at the end of each day.”

Matchdays were the same. She took the bus to the match, played in the game, and then took the bus back home. “It was the exact same as playing for my neighborhood team, but with the name of the most important club in Argentina.”

After 12 years with Boca, the opportunity arose for Vanesa to finally become a professional footballer. This would require her to move to Colombia. The country was organizing a professional women’s league and she could be a part of the inaugural season. It was the first time she would leave her home for more than just a couple of days.

In Colombia, Vanessa finally got paid to play the game she loved. She could focus all her attention on football and didn’t have to worry about all the other things. The club provided her a place to live and even though she still traveled sometimes by bus, the buses were chartered. “Everything was different. Just the fact that we actually flew on a plane to our matches, just like the men did, was both new and incredible.”

The Colombian league provided Vane with the opportunity to play professionally, but the league season only lasted four months. Knowing that a World Cup was around the corner, she feared that if she did not continue to play first team football, she would not arrive to France at her highest level.

As she traveled back to Argentina in 2018, she stepped off the plane in Buenos Aires and her phone rang. “Some weird number was calling me. It wasn’t from Argentina or Colombia. It was an agent – he told me that his club Logroño was looking at me and wanted to make me an offer. I told him in that very moment that if he could make it happen, I would sign a contract with the club.”

Vanesa traveled to Spain and after just three practices with the team, she was selected as a starter in her first match against Valencia. It was Logroño’s first season playing in the Spanish first division. “The level of play in Spain is much higher than Colombia or Argentina. I love playing here, it’s a very competitive league and much more professional than even Colombia.”

The team finished mid-table, good enough to remain in the top flight. Vanesa is currently back with the club, preparing for her second season with Logroño. For now, Spain is where she knows she needs to be. “One of my remaining goals is to return to Boca and play in the Bombonera. I want to continue to grow as a player and as a person, but [returning to Argentina] would be taking a step down.”

Vanesa has been a part of the Argentine national team since she was 16. She started with the under-17s and then the under-20s before finally making her debut for the first team in 2011. She was blessed to be one of the 23 selected to play in the 2019 World Cup. “To play in a World Cup was a lifelong goal. Coming from the neighborhood I came from, I never thought I would travel to France, and to go there because I play football was unbelievable.” 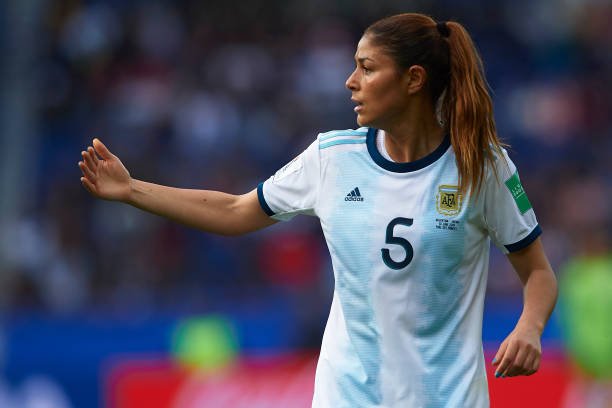 Vanesa doesn’t credit her selection to the World Cup to her own hard work and dedication – “it is all thanks to God and my mother who have supported me in everything. It makes me want to cry when I think about where I came from and what I’ve had to fight for to be where I am.”

The Argentina national team achieved a historic result in the World Cup, but still fell short of qualifying for the knockout stage. After the match against Scotland where Argentina turned around a three-goal deficit in the final 15 minutes, “we couldn’t sleep and were up all night full of emotions. But at the same time, we were devastated that we were out of the World Cup and hadn’t accomplished our goal of getting out of the group.”

Those same mixed feelings returned after the Pan American games when once again, Argentina achieved a result never before obtained, but fell short of their ultimate goal. The Albiceleste lost to Colombia in the final on penalties (Vanesa successfully converted her chance) and left with the silver medal – the teams first ever appearance on the podium.

“We gave all we could, and we will continue to give our best and keep trying to help women’s football grow in Argentina.” Vanesa’s focus is on the next generation and making sure that those girls who watched the World Cup and were inspired to pick up a football, get the chance write future history. “[The AFA] needs to start forming teams with girls as young as four or five. They need to start treating the young girls the same way they do the boys and give them all the same opportunities. Having a professional league is a good start, but more still needs to be done.”

Thanks to football, she has been able to form eternal friendships, including her best friends on the Argentina squad, Natalie Juncos and Mariela Coronel. The three affectionally call themselves “Las Compis”. She would love to get all the girls together in Spain for the holidays but admitted that all her extra money she sends back home to help her family in Argentina.

Vanesa is an extraordinary person. She is one of the best women’s footballers in Argentina, but football alone doesn’t begin to tell her story. Vane’s friend and teammate Natalie described her this way: “She is a great player. She gives all she has and leaves it on the field.  She goes hard into every tackle. She’s a lot of fun to play with. First she is a great player, but most importantly, she is a great person. I really admire who she is and how she lives her life. She always see the positive out of situations and out of people.”

It all began in barrio Jose Hernandez. That’s where Vanesa learned how to care for others, love God, work hard, and play football. She has reached the pinnacle of her career and achieved more than she ever thought possible. Yet in everything she does, her focus returns to where it all began.

As we finished our conversation and went through some “rapid-fire” questions, I asked Vanesa if she won the lottery, what her first purchase would be. She didn’t say a house, a boat, a private island, or anything that would benefit herself and make her life easier. Her answer sums up the beautiful person she is:

“I would purchase football fields for the kids in my neighborhood in Argentina.”

Get to know Vanesa Santana

Which accent do you prefer, Colombian or Spanish?

Locro. Nothing is better than a bowl of locro on a cold day.

Raviolis. But I’ll never die of hunger, I’ll eat whatever food I’m given. I love to try new foods.

Whichever you put in front of me. (After asking this question, Vanesa was so excited to talk about mate, we went off on a 10-minute tangent all about our shared love of mate. She is the only Argentine at Logroño and she drinks mate alone. Teammates have tried it, but none of them liked it.)

What is a non-football related goal that you want to achieve in the next year?

Bring my mom to watch me play in Spain.

A place you want to visit that you haven’t yet?

What do you like to do in your free time?

Drink mate, listen to music, watch movies, clean, or go for a walk.

Who is your football hero?

2 responses to “Fight for Everything: An Exclusive Interview with Argentina’s Vanesa Santana”