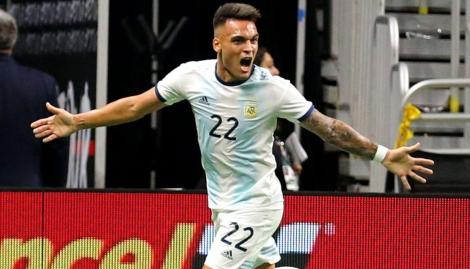 Still without Lionel Messi and Sergio Agüero and now minus players from either Boca Juniors or River Plate due to their Copa Libertadores semi final, Lionel Scaloni has named a new squad for the October friendlies against Germany and Ecuador.

A positive international break earlier this month so a number of the new generation impress and a number will get another opportunity with Argentina set to face Germany in Dortmund on October 9th before travelling to Spain to play Ecuador on the 13th.

Lautaro Martínez after his hat-trick against Mexico remains the focal point of the attack, Paulo Dybala gets another chance to prove his worth and the now familiar faces of Leandro Paredes, Rodrigo de Paul and Nicolás Tagliafico continue to provide the base of Scaloni’s side.

In the absence of River and Boca players and therefore Franco Armani and Esteban Andrada missing out, Udinese’s Juan Musso and Arsenal backup Emiliano Martínez have seized the chance to join Agustín Marchesín as the three goalkeepers.

River duo Gonzalo Montiel and Lucas Martínez Quarta featured earlier this month and so the return of Juan Foyth and Renzo Saravia has the right side of defence covered while Grêmio centre back Walter Kannemann comes back into the squad. 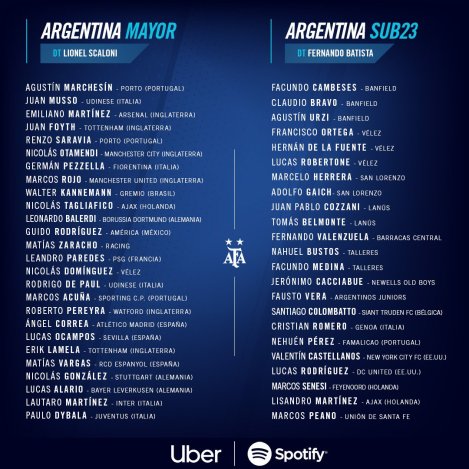 Vélez Sarsfield midfielder Nicolás Domínguez keeps his spot and with no place for the impressive Exequiel Palacios there is an opportunity for another Superliga youngster as Racing Club’s Matías Zaracho comes in.

Erik Lamela and Ángel Correa return to the squad while Lucas Ocampos, who has impressed since his summer move to Sevilla, is given another shot after withdrawing through injury earlier this month.

Two of the more surprising choices perhaps are the promotions of Matías Vargas and Nicolás González, both on target as the under-23s defeated Colombia.

Going the other way is Adolfo Gaich, who returns to the under-23 squad as Fernando Batista prepares for the pre-Olympic tournament in January. The San Lorenzo centre-forward made his senior debut but bolsters an under-23 side immediately improved by Gaich’s inclusion.

Jerónimo Cacciabue has been in excellent form for Newell’s and Lanús’ Tomás Belmonte comes in while in attack Nahuel Bustos is included after scoring three goals this season for Talleres.

Batista will be taking a last look at some of these players before trying to trim down his squad ahead of an important 2020.