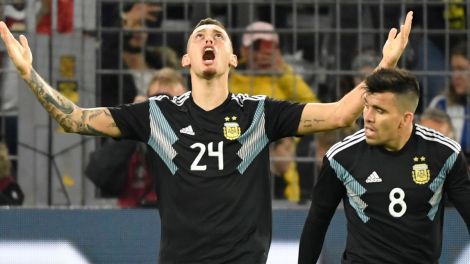 Argentina produced a splendid second half comeback to draw 2-2 with Germany in Dortmund, substitutes Lucas Alario and Lucas Ocampos cancelling out the hosts earlier strikes.

Lionel Scaloni’s decision to field Nicolás Otamendi and Marcos Rojo at centre back had raised eyebrows and those critics were almost immediately vindicated as Germany ran riot in the opening 45 minutes.

The pace of Germany’s youthful front line had already threatened when Serge Gnabry managed to escape the attention of Otamendi and Rojo to collect a low cross and poke the ball past Agustín Marchesín and it rapidly got worse for Argentina.

The particularly erratic Rojo lost possession close to halfway and Germany sliced through on the counter for Kai Havertz to slide in a swift second.

Julian Brandt almost came managed to turn in a header across the face of goal and Marcel Halstenberg rattled the crossbar with a free-kick as it began to look as though things could get ugly for Lionel Scaloni’s side.

As an attacking force Argentina were virtually anonymous with Lautaro Martínez and Paulo Dybala unable to impact the game and a long range Rodrigo de Paul shot hitting the post was the only real response to an otherwise dominant first half from Germany.

However the proverbial game of two halves saw Argentina much improved after the break. Lionel Scaloni’s decision to switch to a back-three and the introduction of Marcos Acuña and Lucas Ocampos saw La Albiceleste finally take a grip on the game and begin to fashion chances.

Lucas Alario had only been on the pitch a few minutes when Acuña whipped in a cross from the left and the Bayer Leverkusen centre-forward headed past Marc-André ter Stegen.

As Argentina increased pressure Leandro Paredes and Alario both went close to an equaliser before finally forcing level. Alario bursting into the penalty box and easing the ball into the path of debutant Ocampos whose shot deflected past Ten Stegen.

If either side looked likely to snatch a winner it was Argentina but Germany held on for a draw which perhaps on balance was fair. Lionel Scaloni certainly got the test that he wanted in Dortmund and will have plenty to ponder after a game of such contrasting halves. The Albiceleste play Ecuador in Spain on Sunday.