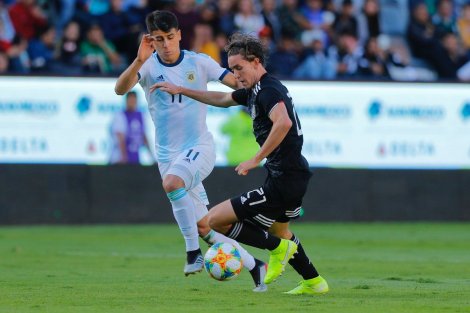 Days on from a heated 2-2 draw in Ciudad Juárez, Argentina under-23s locked horns again with Mexico in their preparations for the pre-Olympic tournament in January and once more it ended all square.

Lanús midfielder Tomás Belmonte headed the equaliser eight minutes from time in Pachuca to give Fernando Batista the draw that his side deserved at the very least.

An excellent opening 45 minutes should have seen Argentina in front but Batista’s rotated eleven were unable to make their dominance count. With Carlos Valenzuela pulling the strings only the final ball was really lacking that prevented either Nahuel Bustos, Brian Mansilla or Valentín Castellanos making the breakthrough.

Instead it was Mexico who took the lead shortly after the break punishing Argentina for their wastefulness. A corner from the right found defender Luis Hernández and his flicked header from the near post looped over Facundo Cambeses.

New York City FC forward Valentín Castellanos came close to heading an equaliser not long after and as the clear chances began to dry up, Argentina looked most threatening via substitute Lucas Robertone’s set-pieces.

The warning signs were there for Mexico when fellow sub Tomás Belmonte headed over from one of Robertone’s earlier free-kicks but in the 81st minute the pair combined once again for the Lanús midfielder to nod past Luis Malagón.

There was certainly no love lost between the two sides and Argentina will have gained valuable experience ahead of January’s pre-Olympic tournament.