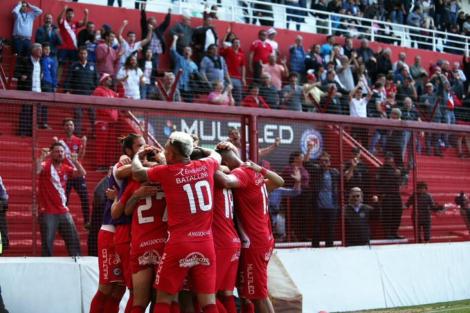 There is still a long way to go but Argentinos Juniors moved three points clear at the top of the Superliga on Wednesday afternoon after a Gabriel Hauche goal gave Los Bichos a 1-0 win over Talleres.

Boca could of course draw back level on Thursday with their game in-hand against Lanús but for now Argentinos are revelling in their surprise title challenge.

A couple of strong penalty shouts for handball waved away and one tremendous save by Guido Herrera to deny Miguel Torrén had frustrated Diego Dabove’s side during the opening 45 minutes.

And Talleres almost made Argentinos pay. Improved after the break, Dayro Moreno missed two good chances, the second when through on goal beating Lucas Chaves only to come back off the inside of the post.

Breathing a sigh of relief the home side then seized the advantage, Santiago Silva slipping in fellow veteran Gabriel Hauche and the former Racing striking finishing past Herrera.

Six wins in the last seven, another clean sheet and unbeaten in La Paternal, Argentinos Juniors would still be hugely surprising champions but are transformed under Diego Dabove and dangerous.

Independiente began life under interim manager Fernando Berón but many of the same issues were still evident as El Rojo threw away a two-goal lead for the third time this season allowing Unión to snatch a last-gasp point.

Referee Pablo Echavarría reportedly apologizing to Independiente for the incorrect 88th minute penalty awarded that prompted Unión’s comeback excused that to some extent but only served to fan the talk of conspiracy against the club.

José Sand’s offside winner for Lanús in the cup and Andrés Roa’s overturned red card in the defeat to Argentinos Juniors in the two games prior only added to a catalogue of decisions that the club feel have gone against them over the past couple of seasons.

Desperate for a result after the departure of Sebastian Beccacece, Independiente started well with Silvio Romero heading in a 24th minute opener.

Even when full-back Fabricio Bustos foolishly picked up his second yellow card soon after, El Rojo still managed to extend their advantage. Romero getting in behind, pulled down by Yeimar Gómez Andrada and scoring from the spot.

With the man advantage Unión were dominant after the break yet were unable to find a way past Martín Campaña. Frustration for the home side was mounting and Jonathan Bottinelli was perhaps fortunate to get away with an elbow on Nicolás Domingo.

When Unión had looked to have run out of ideas, Gabriel Carabajal tumbled to the ground with Lucas Romero in close proximity. Even after replays there was little to no contact but Echavarría pointed to the spot. Walter Bou scored and with two minutes of normal time plus an additional five added, there was a sense of inevitability about what was coming.

Only seconds remained when the ball was lofted into the Independiente penalty area, nodded back across goal and into the net by the unmarked Nicolás Mazzola.

“It was an invention. This has happened since I arrived four years ago. It’s sad that it happens and we don’t know why,” Campaña said after confirming the officials apology with Martín Benítez going on step further, “There is something against Independiente.”

Talks of conspiracy against president Hugo Moyano will never bear any fruit and so Independiente must focus on getting things right in-house if they are to turn this around.

The next manager out the door in the Superliga may very well be Juan Antonio Pizzi after San Lorenzo slipped to a fifth defeat in six against a Defensa y Justicia side who had scored only five goals this season prior to their visit to Bajo Flores.

Despite making a dream start inside two minutes with Ángel Romero bundling in at a corner, a woeful San Lorenzo were swept away.

Defensively at sea, the visitors could have scored four or five and needed only minutes after the restart for Rafael Delgado to head in a third.

After their strong start that had some wondering whether Pizzi could steer the club to another league title, the former Spanish international looks to be heading for the exit.

Lastly in Avellaneda, defending champions Racing Club were hoping to go second with victory over Banfield but were unable to find a way past their battling visitors.

Banfield’s form has left them in the thick of the relegation battle and so every point is valuable. Still hovering above the drop zone this will surely be one gained given Racing’s dominance.

Colombian goalkeeper Mauricio Arboleda was forced into a number of saves and even when beaten by Iván Pillud’s deflected shot the ball came back off the post.

A rare foray forward in the second half did see Agustin Urzi hit the woodwork in what would have been a shock breakthrough but otherwise it was Racing hammering on the door. Lacking a little of the creativity needed to truly unlock the deep, Banfield block, the home side were reduced to a number of efforts from range but couldn’t find a winner.