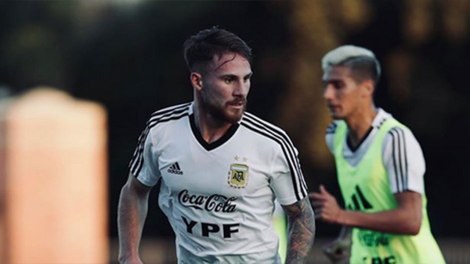 Lionel Scaloni’s Argentina squad are already arriving in Mallorca ahead of next week’s friendlies against Brazil and Uruguay but have confirmed that Roberto Pereyra and Marcos Rojo will miss the trips to Saudi Arabia and Israel through injury prompting a call-up for Alexis Mac Allister.

Argentina play their final friendlies before World Cup qualification begins in 2020 with a match against Brazil to take place on Friday November 15th in Saudi Arabia and a second friendly with Uruguay in Tel Aviv four days later.

They will do so without Roberto Pereyra after the Watford midfielder suffered a hamstring injury in the Hornets first win of the Premier League season on Friday evening.

Given the 28-year-old’s form there would be many that would question Pereyra’s continued inclusion in the Argentina squad.

Pereyra though was perhaps not the most critically viewed call-up in Scaloni’s initial squad. Marcos Rojo’s days at international level are supposedly numbered and yet even after his horror show against Germany in the previous FIFA date, the Manchester United defender was set for another chance.

Rojo replaced youngster Brandon Williams in stoppage time during United’s 3-1 win over Brighton on Sunday but was a surprise withdrawal a few hours later.

In their absence, Scaloni looked to name only one replacement with Alexis Mac Allister coming in to compensate for Pereyra.

The Boca Juniors midfielder made his Argentina debut in the goalless draw with Chile in September and then started a few days later as Scaloni’s side eased past México in San Antonio.

Mac Allister had been named in Fernando Batista’s under-23 squad ahead of the pre-Olympic tournament in January and while the 20-year-old isn’t ruled out for a place in Colombia, for now the Brighton loanee gets another opportunity to impress Scaloni.

While Alexis has shown a degree of versatility and discipline in the Boca midfield under Gustavo Alfaro, the natural number ten is not a like-for-like replacement for Pereyra, who is capable of a number of roles down the Argentina right.

There remain decent options available to Argentina regardless but Scaloni decided against replacing Rojo in defence.

Lisandro Martínez’s ability to play at centre-back, left-back or in defensive midfield as the 21-year-old has been for Ajax would seem to be an ideal choice but Scaloni continues to overlook the talented Newell’s Old Boys product.