All eyes were on Paraguay this Tuesday for the CONMEBOL World Cup qualifying draw and an evening in which the continent’s best club sides discovered their opponents in the 2020 Copa Libertadores and Copa Sudamericana.

River Plate, boosted by the news that coach Marcelo Gallardo will remain at the club next year, were given the most difficult task as the six Argentinian representatives in each of CONMEBOL’s two major club competitions learned their fate.

Aiming to reach a fourth Libertadores final in six years, River were drawn in Group D against three-time champions São Paulo and face two energy-sapping away games at altitude with Liga de Quito and Peruvian champions Binacional. The minnows, knocked out of this year’s Copa Sudamericana by Independiente, make their Libertadores debut and will look to play their home games in Juliaca, 3,825 metres above sea level, rather than Arequipa (2,335 metres), where they hosted El Rojo.

River remain favourites such is their record in the Libertadores under Gallardo but the potential for an upset is there.

Rivals Boca Juniors had new vice-president Juan Román Riquelme honoured at the ceremony will be far happier with their draw. Yet a reunion with River icon and old foe Ramón Díaz, unveiled as Paraguayan club Libertad’s new manager earlier in the day, adds an interesting narrative to Group H.

A long trip to Venezuela to face domestic champions Caracas FC and one of the sides to come through the qualifying rounds should see Boca secure a place in the knockout stages.

One of the possible sides to take that final spot in Group H is Atlético Tucuman. El Decano returning to the Libertadores thanks to River’s Copa Argentina win last week and their fifth-placed finish in last season’s Superliga.

Ricardo Zielinski’s side will take on an as yet not confirmed Bolivian side in the second round before facing the winner of Independiente Medellín against Deportivo Táchira. The winner of that third round qualifier will go into Group H with Boca.

The qualifying rounds will be completed by the end of February with the group stages scheduled to begin in the first week of March. 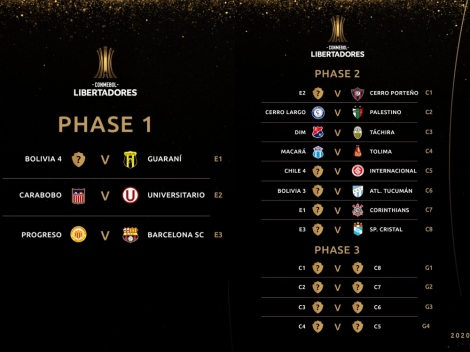 Racing Club will also be satisfied with their draw. Coach Sebastián Beccacece is ready to be confirmed as Eduardo Coudet’s replacement and La Academia will be confident of reaching the knockout stages once more.

The 2018-19 Superliga champs were drawn against Uruguayan champions and three-time Libertadores winners Nacional along with Peruvian and Venezuelan league runners-up Alianza Lima and Estudiantes de Mérida.

While Copa de Superliga winners and now Primera Nacional side Tigre face Palmeiras, Bolívar in the altitude of La Paz and the winners of one of the qualifiers, potentially Corinthians (but could also be Cerro Largo, Palestino, Guaraní or one of the Bolivian clubs yet to confirm a spot).

And in the Copa Sudamericana, the first round of the tournament was drawn so six Argentinian clubs discovered their opponents for February before the long wait until May when ten third-placed sides from the Libertadores group stage drop down to enter the second round.

Seven-time Libertadores champions and 2017 Sudamericana winners Independiente take on debutants Fortaleza, who qualified thanks to a ninth-placed finish in Brazil.

Current Superliga leaders Argentinos Juniors face a trip to the altitude of Huancayo to take on Sport Huancayo and will be hoping to wrap things up in the first leg in La Paternal.

Vélez Sarsfield and Lanús face the same issue with trips to the Ecuadorian captital of Quito. Gabriel Heinze taking his Vélez side to take on Aucas and Lanús facing Universidad Católica, who Independiente edged out on away goals in the round of 16 this year.

While Unión have a tricky tie against Brazilian side Atlético Mineiro and Huracán face 2016 Libertadores champions Atlético Nacional. The two sides met that year in the round of 16 and some controversial refereeing left El Globo fuming in Medellín as Atlético won the second leg to progress.