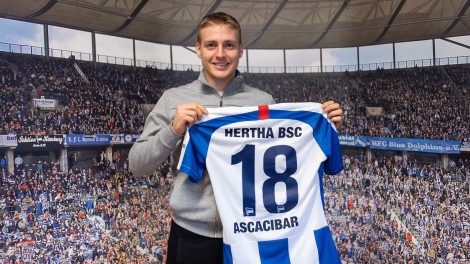 A new year and a fresh start for Santiago Ascacibar as the 22-year-old completed his transfer to Hertha Berlin on January 1st.

After two-and-a-half years in Germany at VfB Stuttgart and suffering relegation to Bundesliga 2, Ascacibar is back in the top flight with Hertha Berlin paying around €12 million for the midfielder.

The Old Lady sit 12th in the Bundesliga at present and Ascacibar is the first signing for manager Jürgen Klinsmann, who only arrived at the club at the end of November.

The Argentinian has signed on a long-term deal with the club ✍️#hahohe pic.twitter.com/fte6AdL7LA

“They were two-and-a-half very good years in Stuttgart. I felt very comfortable and made a lot of friends. I thank the fans of the team who always supported us. I wish them all the best for the future,” Ascacibar said after his departure was confirmed.

That drive and motivation is evident in Ascacibar’s style of play and when asked by the official website how he would best describe his playing style, the former Estudiantes midfielder answered, “Now that’s a tricky question. I would say that I am first and foremost a professional, who is always 100% committed to helping out the team. I give everything on the pitch to help my team!”

Ascacibar made 13 appearances this season in the Bundesliga 2 with Stuttgart and played two seasons of top flight football before relegation at the end of the 2018/19 season last May.

“After holding talks with Michael Preetz and Jürgen Klinsmann, I believe I can continue to develop as a player here and that we can achieve a lot together. I’m really looking forward to that and can hardly wait to get to know my new teammates. We’ll do everything we can to keep climbing up the table in the second half of the season.”

Those two seasons previously contributed 56 Bundesliga appearances and Ascacibar has also earned three Argentina caps, despite not yet reaching the levels many anticipated when bursting into the first team in La Plata.

“Santiago can operate in a number of roles in central midfield. At 22 he’s a young midfielder with the potential to develop further. He’s very strong in the tackle. We’re delighted to have recruited another very talented player into our squad,” said Hertha Berlin sporting director Michael Preetz.

That tackling ability and energy to win back possession is what typifies Ascacibar’s style of play and while it doesn’t appear to be the type of number five that Argentina coach Lionel Scaloni favours, there is a strong argument that such a player is required in the squad.

Ascacibar can now look to push his claim and could make his Hertha debut against Bayern Munich on January 19th.