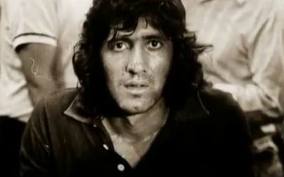 In 1993, when Diego Maradona returned to Argentina to play for Newell’s Old Boys after a hugely successful career in Europe, he had established himself as the greatest player of his generation, possibly all-time. Upon his return a journalist commented that the greatest footballer had arrived in Rosario. Maradona responded by saying “The best footballer has already played in Rosario, and his name is Carlovich.”

Felipe Tomas “Trinche” Carlovich, a name revered on the streets of Rosario but less well known around the world. Maradona is not alone in his respect, but how is it that such a player did not have a more decorated career and why is he not more of a household name?

Trinche was born in 1949 and grew up in the neighbourhood of Belgrano in Rosario. Rosario is situated about 300 km north west of Buenos Aires on the western shore of the Parana River meaning that it has always been inundated with immigrants from across Europe. Son of a Yugoslavian immigrant, Trinche remained tied to both his family and the streets he grew up in in Belgrano. The same streets in a humble area of the city where a young man learned and developed his extraordinary talent. This upbringing and the connection with the area go some way to explaining why he is not more of a household name.

By his own admission Trinche never aspired to be a professional footballer and all the fame and success that comes with it. The dreams of most children in Rosario fall into two categories – play for Rosario Central or play for Newell’s Old Boys. Although Trinche was not someone who shared these desires, it was Rosario Central who first offered him a route into professional football in 1969. This was short lived as chances were not as prevalent as he would have liked and so he asked to be released. This led to a brief spell at Flandria before a move to Independiente Rivadavia and then Central Cordoba, the two clubs for which he is best known and the clubs that Trinche described as “the two loves of my life.”

The legend of Trinche in many ways was born at Rivadavia where he quickly became a favourite with the Mendocinos. His amateurish appearance with shirt unbuttoned, chest puffed out and no shinpads so his socks rolled down made him instantly recognisable and someone the fans could relate to. He was also part of a Rivadavia team that famously beat Inter Milan. But his time was short as the boy from Rosario could never leave behind his home on the banks of the Parana. Teammate at Rivadavia, Hugo Memoli captures both how much Trinche wanted to return to Rosario and also his outlook on football, “We played against San Martin and Thomas (Trinche) wanted to go that afternoon to Rosario. But if he played the whole game he missed the buses so he was sent off in the first half. He bathed and left running. He never took anything too seriously.”

Before too long Trinche got his wish and returned to Rosario to play for Central Cordoba during his most successful spell as a footballer and undoubtedly the most important. He was back home and for him to play for Central was akin to playing for Real Madrid. With him, Central Cordoba won two second division championships, one in 1973 and another in 1982, a small return for such a great talent. While there, it’s claimed that Trinche received bonuses for the number of nutmegs he could perform and he would sit on the ball during the games so he could “have a break”. The validity of these claims is irrelevant now but they all contribute to the story of Trinche.

Perhaps the most famous event in Trinche’s career came in 1974 when as preparation for the World Cup the Argentina national team travelled to Rosario to play a friendly game against a team of players exclusively from the city. Trinche Carlovich was in good company in a Rosario team featuring Mario Kempes and Mario Zanabria. At half time the team from Rosario were leading three nil with Carlovich pulling the strings from midfield. They were so dominant that the Argentine manager, Vladislao Cap, asked Rosario to substitute him at half time. They did so and the final score was a 3-1 victory to Rosario.

Somewhere between the myth and the legend there must be some truth judging from the testimonies of so many respected figures. Daniel Passarella and Diego Maradona both held Trinche in the highest esteem and Jose Peckerman claimed he was the best central midfield player he had ever seen. These events were the pinnacle of his career and while some may ask why he never did more, he was content with his life and aspired to nothing more, not willing to commit to strict training and dietary habits and certainly not to moving away from his beloved Rosario. Offers arrived from New York Cosmos and Milan but none of this interested Trinche. His family, his friends, the neighbourhood he grew up in and fishing were all more important.

Now almost 70, and continuing to shun the limelight, Trinche’s career is like a series of Chinese whispers as tales of his achievements are passed from person to person without much in the way of evidence. This adds not only to his legend but also to the romanticism of football. Every great footballing nation has its own Trinche, a once in a generation talent left unfulfilled for one reason or another, but who still has the ability to enrapture football fans around the world through the legacy that they leave and the ‘what if’s’ left unanswered.

For Spanish speakers here is a great documentary on Trinche…couldn’t find any subtitles so sorry!
Thanks to In Bed with Maradona for sharing this article.