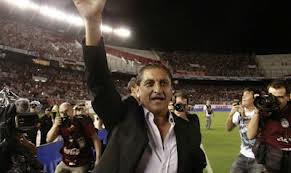 Sunday night’s game in the Estadio Monumental marked the new beginning under returning manager and River legend, Ramon Diaz. Never shy to give the press his opinion and responsible for the most successful spell in River’s illustrious history the future is going to get a lot more interesting and River fans will hope equally lucrative.

Diaz’s return brings a new hope and expectation to the Monumental and while many manages may crumble under this immense weight Diaz will be relishing it. When someone has such confidence in their abilities it is very difficult to break them and, at his unveiling as the new manager back in December, Diaz set the tone of his return by modestly claiming, “I am the greatest manager in this club’s history and with me in charge they would never have been relegated.” Referring to River’s relegation in 2011 for the first time in the clubs history perhaps gives some insight into why expectation is so high. As River now emerge from what was the darkest era they now look forward but with the ever present reminder of the glory of yesteryear.

That is not to say that his appointment is the turning point, for sacked manager Matias Almeyda deserves considerable credit for the job he did in the wake of relegation and should not be forgotten.  Immediate promotion back to the top flight and a fairly comfortable first season laid considerable foundations for what Diaz must now build. His advantage here being that he arrives on the crest of a wave and the club in buoyant mood rather than the huge black cloud and funereal atmosphere that Almeyda inherited. Perhaps, Almeyda had taken them as far as he could for now after a series of below par performances. Time will certainly tell if the reappointment of Diaz is a good one.

Like Almeyda, Diaz is seen as ‘one of their own’, both products of River’s youth system, then heroes among the thousands of spectators that pack into The Monumental and ultimately taking the top job after announcing their retirement.   The big difference being the unparalleled success that Diaz oversaw during his spell in charge. Diaz took over in 1995, just after his retirement as a player, and in his first full year in charge guided River to the Copa Libertadores in 1996. Before the end of this first stint, ending in 1999, River would also win four national championships and the Supercopa Sudamericana and the team that Diaz sculpted would be considered one of the best ever. The likes of Enzo Francescoli, Marcelo Salas, Ariel Ortega, and the aforementioned Matias Almeyda led River to much of this success but even after losing some of these players the River conveyor belt introduced the likes of Javier Saviola and Pablo Aimar. After a brief spell away, Diaz returned in 2002 and immediately brought with him success by capturing the Clausura tournament. However, his untenable relationship with club President, Jose Maria Aguilar meant that later that year Diaz left for the second time.

What was to happen next is probably ranked as one of the most bizarre managerial appointments in football history. One of the most successful managers in South American football history made the transition to Europe, and took over at Oxford United, at the time plying their trade in England’s fourth tier. How was such an unlikely match made? There appear to be different answers to this question: Diaz maintained that it was footballing reasons, stating “I like English football and I wanted to get first-hand experience of it. It’s also very interesting to work at this level, because it’s completely different from football at the top.” It’s these differences that make this tale so unlikely, not that I want to question Diaz’s integrity. Diaz apparently worked for free in exchange for a 10% stake in the club and in doing so Oxford were also able to skirt any potential work permit issues. Whatever, the truth behind this story was it was an experiment which, although initially had good results, ultimately failed for both Oxford United and Ramon Diaz.

In 2007 Ramon Diaz returned to Argentina to take over at San Lorenzo. His midas touch on Argentine soil continued and in his first season in charge San Lorenzo won the 2007 Clausura title, the first in six years. However, it was at this point that problems began to surface and tensions between Diaz and some of his senior players and club officials meant relations were at breaking point. The fall out eventually saw Diaz leave his post after just a year in charge and is added to the list of broken relationships that Diaz has cultivated in a relatively short managerial career.

Over the next four years Diaz would take charge of three different Jobs. First in Mexico, with Club America, where he was apparently paid an exorbitant amount of money before being fired in 2009. Then a return to San Lorenzo where he was unable to match the success of his first spell resulting in him resigning after a year and lastly at Independiente, where he also resigned following a spell of poor results.

And now Diaz has returned to the place where it all started for him, as a boy in River’s youth team. Since his last spell at River his career has taken a downward turn barring the one championship while at San Lorenzo and so his return is not only a chance for River to revive their glorious days of old but also Diaz to remind the world that he is as good a manager as he says he is. What is without question is that his return has given the whole club a lift and now the fans wait expectantly for results. The initial signs are good, wins in pre-season over rivals, Boca Juniors and two wins out of two in the league with no added distraction of the Copa Libertadores could see River mount a real challenge for the title. Can Ramons Diaz replicate the success from earlier in his career?