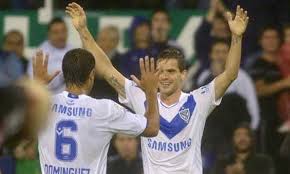 This week saw the second round of games in this year’s Copa Libertadores and once again Argentinian teams found things difficult. Last season’s domestic champions, Velez Sarsfield got their campaign up and running after last weeks disappointing defeat. They comfortably beat Iquique of Chile at home before their big games with Peñarol, which should decide the group winners. Thursday night saw some of Argentina’s other representatives struggle as both Newell’s Old Boys and Tigre lost. Newell’s had won their opening game but struggled with the long away trip to Venezuela and ended up 2 – 1 losers to Deportivo Lara. Tigre also lost in what was their first game of this years competition going down 2 – 0 to Libertad of Paraguay. ALL THE GOALS CAN BE SEEN HERE….

Goals from Federico Insua, Ezequiel Rescaldani and a deflected freekick from Fernando Gago gave Velez a deserved win in Group 4. This leaves them in second place level with Emelec, who defeated them last week and 3 points behind leaders Peñarol.

Tigre’s opener will be one to forget for their supporters as they lost at home to Libertad. The turning point came in the 53rd minute when Tigre defender, Alejandro Donatti was sent off for a handball on the goalline. Libertad went ahead from the resulting penalty and then late on Jorge Gonzalez scored an outrageous freekick from range.

Group 7 is wide open with all four teams having won one and lost one. This long away trip proved too much for Newell’s and they were behind after 5 minutes when Jesus Gomez tapped home. In the second half Lara doubled their advangage courtesy of a fantastic strike from long range by Marlon Fernandez. Newell’s managed a consolation in injury time through Marcos Caceres and will next host Universidad de Chile.