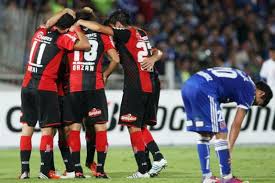 Tuesday night was a good night for Argentina in the Copa Libertadores as both Velez Sarsfield and Newell’s Old Boys ran out winners from potentially difficult games. Velez beat Uruguayans, Peñarol at home 3 – 1 to go top of their group and perhaps more impressively Newell’s travelled to Chile and defeated Universidad de Chile 2 -0 to move into the second qualification spot in Group 7. REPORT AND GOALS HERE….

After last week’s crowd trouble in Uruguay following Velez’s away win the return fixture in Liniers was played behind closed doors but the result was the same. Peñarol went ahead through a Fabian Estoyanoff penalty but Velez struck back 5 minutes later when Sebastian Dominguez’s freekick came back off the post and bounced in off unfourtunate goalkeeper, Enrique Bologna. Bologna’s night got worse in the second half when Federico Insua’s penalty squirmed under his body to give Velez the lead. Jonathan Copete wrapped up the result when he headed in the rebound from his own shot on 77 minutes. The result leaves Velez in charge of Group 4 but with Peñarol and Emelec just behind.

Newell’s gave one of their most impressive performances to see of Universidad de Chile and after last week’s defeat to the same opponents it was a crucial result if they are to qualify from this group. Maxi Rodriguez gave Newell’s the lead following a superb passing move. La U had their chances to draw level but with 7 minutes remaining it was Newell’s who scored, a wonderous strike from outside the box by Martin Tonso. Newell’s are in second behind Olimpia, who thrashed Deportivo Lara 5 -1 on Wednesday.