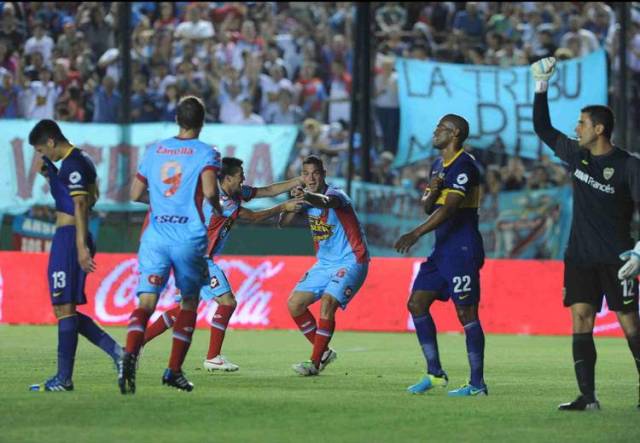 Boca Juniors 3-2 defeat in Sarandi to fellow title hopefuls, Arsenal was a critical blow to Carlos Bianchi’s side as they could be 5 points behind Newell’s later tonight. River Plate‘s woeful season continued as they were beaten by Olimpo in El Monumental. Gio Simeone gave them an early lead but the absence of keeper, Marcelo Barovero and defender, Eder Alvarez Balanta was felt sharply as Olimpo scored 3 times from set-pieces to wrap up the victory. Velez Sarsfield produced one of their better displays of the season (for most the game) as Ramiro Caseres hit a hattrick to give them a 3-goal lead against Rosario Central. Two goals in the final 3 minutes set up a nervy finish for Velez but they were able to hold on. WATCH ALL THE GOALS….

ARSENAL  3 – 2  BOCA JUNIORS
A sloppy start to the game saw Arsenal race into a two-goal lead, firstly a Nicolas Aguirre free-kick and then a wonderfully executed, delicate lob from Milton Caraglio. Boca did improve after the break and got a goal back when Matias Caruzzo headed home, Juan Riquelme’s corner but the home side immediately countered and Ramiro Carrera reestablished the lead. Claudio Riaño did manage to pull it back to 3-2 but Boca were unable to salvage anything else. Arsenal leap-frog Boca with the win and sit 2 points behind San Lorenzo.