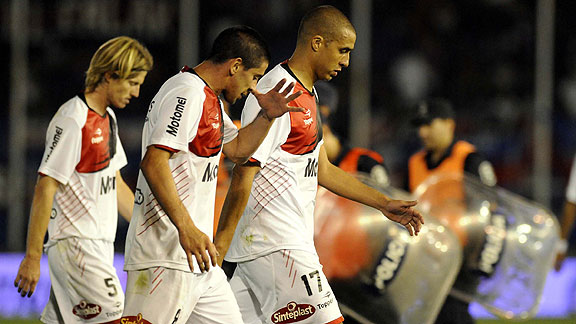 Newell’s Old Boys dramatic slump in form has cost them the lead in the championship and could well now cost them the title. Last night’s 2-1 defeat in Victoria, stretches a run of 5 without a win, and only River Plate and Colon have worse records over the last 6 rounds. At at time when many thought Newell’s would be celebrating another league victory they are now in serious danger of letting this one slip away. WATCH THE HIGHLIGHTS….

Alfredo Berti’s side started the game brightly, despite missing Maxi Rodriguez while he is away on International duty, and took the lead through Fabián Muñoz. Pablo Perez’s perfect through ball found Muñoz and even though his first touch was heavy he managed to flick the ball over the on-rushing Javier Garcia.

Newell’s were unable to capitalise on their lead and Tigre levelled 10 minutes before the break. A training ground set piece was rolled to Sebastián Rusculleda and his left foot drive was a little too strong for the despairing dive of Nahuel Guzman.

On the brink of half time, Newell’s were awarded a penalty and the chance to recapture the lead at a crucial time. However, David Trezeguet opted for power and blazed his effort over the bar.

Tigre improved after the break and just after the hour mark earned a penalty of their own. This time there was no mistake and Angel Diaz stroked the ball into the bottom corner.

Newell’s failed to respond to this and rather limped to defeat which leaves them a point behind leaders, San Lorenzo with 3 games to play.