A dramatic season finally came to an end last Sunday and despite all 4 of the top sides once again failing to take 3 points, it was San Lorenzo who came out on top. A strange season with all the championship contenders conspiring to throw it away meant that despite the lowest points tally in the history of the short season format. In spite of this, there were some great performances and fantastic goals so, as always, Golazo presents its trusty awards….

Way back in August when the Torneo Inicial, Newell’s Old Boys were overwhelming favourites despite the departures of Tata Martino and Nacho Scocco, and it looked as though Alfredo Berti would continue their fine run but an utterly woeful second half to the season derailed their title hopes.

In the 4 or so months that followed there was plenty for fans of Argentine football to enjoy….

Argentina successfully qualified for the World Cup next year in Brazil, easily winning the South American qualifying group and now head to the main event as one of the favourites. Expectation has perhaps grown since the draw as La Seleccion were given a pretty favourable draw. A group consisting of Bosnia-Herzegovina, Nigeria and Iran should not be too complicated but questions remain over the defence and success may hinge on the fitness of key players. 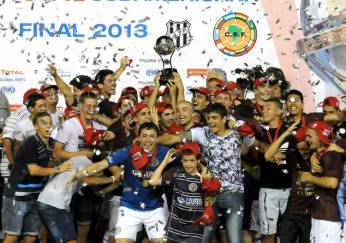 Lanus with the Copa Sudamericana

Lanus came up short in the Torneo Inicial but can still consider their season a success after winning the Copa Sudamericana. A second leg triumph at home against Brazilian outfit, Ponte Preta ensured that Lanus captured only their second international trophy. Manager, Guillermo Barros Schelotto continues to impress in his first managerial position and no doubt watchful eyes in La Bombonera will be monitoring his progress.

Arsenal de Sarandi won the Copa Argentina thrashing San Lorenzo in the Final making it their fifth trophy since 2007. Although they trailed off in the Torneo Inicial, a respectable fifth place finish signifies another good year in the Estadio Julio H. Grondona.

For several of Argentina’s bigger sides, this season has not been so successful. Racing made the worst start to a season in their history but have cause for optimism as performances have improved since the return of club legend, Mostaza Merlo. River Plate, went from pre-season title contenders to relegation fodder as Ramon Diaz’s new signings seriously back-fired and a serious lack of goals cost River dearly. Boca Juniors hung in the title race for a while but in truth never quite looked like a championship winning side. Leaky at the back and far too reliant on the fitness of Fernando Gago and Juan Roman Riquelme led to a very inconsistent Torneo.

PLAYER OF THE TORNEO

With San Lorenzo winning the title it comes as no surprise that the player of the Torneo Inicial comes from their ranks. There were other good performances from Sebastián Torrico, Juan Mercier, Ángel Correa and Walter Kannemann but the driving force behind El Ciclon’s success was Ignacio Piatti.
With 8 goals and 5 assists, Piatti was the player involved in the most goals in the league and at crucial times, the skillful midfielder has stepped up for San Lorenzo.
This was evident when San Lorenzo were trailing two-nil away to Atletico Rafaela. Heading for defeat at a crucial point of the season, in a stadium where few teams took anything this year, Piatti’s sensational second half brace rescued a point and was a big moment in the title race.

MANAGER OF THE TORNEO 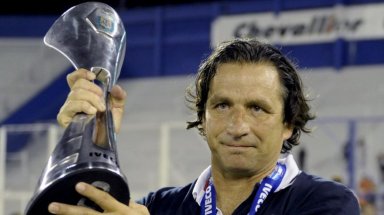 Again, rather predicatably this goes to San Lorenzo Coach, Juan Antonio Pizzi. Jorge Burruchaga exceeded expectation with Rafaela as they enjoyed a fine run but as it was Pizzi who got his hands on the Torneo Inicial trophy, the 45-year-old coach is a worthy winner.
Losing top scorer, Martin Cauteruccio for the season and also missing the pace of Gonzalo Veron, Pizzi managed to still get the best from his squad and produce some wonderful attacking football. Pizzi has also brought through a number of good young players and if San Lorenzo can keep hold of them, another challenge in the Torneo Final is realistic.

GOAL OF THE SEASON

There were some fantastic goals scored in this year’s Torneo Inicial and picking one has been difficult. Here are my top 3….