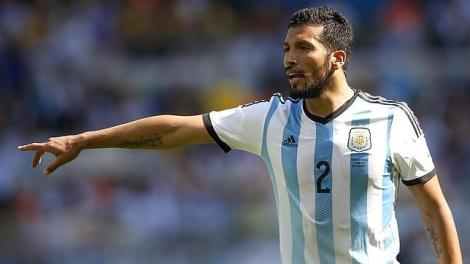 Ezequiel Garay in action for Argentina during the World Cup

After months of speculation, Argentine defender Ezequiel Garay’s on-off transfer to Russian side, Zenit St Petersburg has been completed. Andre Villas Boas’ side have beaten off reported interest from Manchester United and Bayern Munich to seal a €15 million deal for the 27-year-old.

Some weeks ago, Zenit had announced the signing of Garay and it transpired that this was a little premature as then stories of a move to Bayern Munich surfaced but after all the speculation the deal is now complete.

Zenit wrote on their website: “Zenit and Benfica have reached an agreement over the transfer of the defender of the Argentina national team. The contract has been signed for five years from July 1. The player will join the team after the World Cup.”

Zenit have paid €15 million for Garay but unfortunately for Benfica they will receive only €6 million of this as they owned only 40% of the rights to the player. Real Madrid owned 50% of the player, and a third party owned the remaining 10% bringing the total to €15 million.

It is a blow to Benfica, losing such an important player after a season where they did a domestic treble and were runners-up in the Europa League and is perhaps a little surprising that Garay is moving to Russia at this point in his career.

Garay said his farewells via Benfica TV, saying, “I want to thank everyone who supported me in these three magnificent years I spent at Benfica. In particular the president, who believed and invested in me, and the coach who made me evolve and reach a level that I’m very proud of. Thanks also to all my team-mates with whom I had the honour of playing with for this club. I want to return all the love that Benfica and the supporters gave me. I’ll take all the unforgettable moments I’ve had in Portugal in my heart. Thanks!”