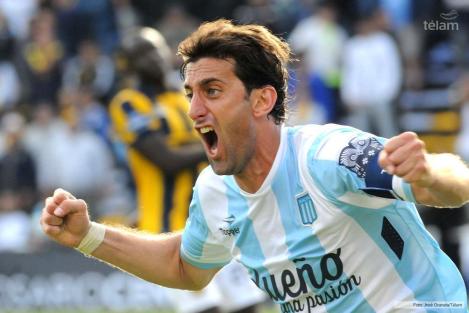 Racing Club are now just one match away from capturing their first title since 2001, after a Diego Milito inspired 3-0 win away to Rosario Central. River Plate were made to work hard to ensure that the championship will go to the final round, as they came from behind with 10 men to defeat Banfield in the Monumental and set up a dramatic final day, which will take place on December 14th, due to River’s involvement in the Copa Sudamericana. Lanús were unable to keep the pace as they somehow squandered a two-goal lead at home to Boca, despite the hosts being having Emanuel Insua sent off while still trailing. The point leaves Lanús out of touch and results also end Independiente’s hopes so the trophy will be heading to the Cilindro or the Monumental in just under two weeks. In Sunday’s non-title impacting match, Tigre defeated Atlético Rafaela 3-1 in Victoria.

Having spent 80% of the season waxing lyrical about Marcelo Gallardo’s River, it seems strange to see Diego Cocca’s Racing side on the brink of the title but while River were attracting all the headlines, Racing have quietly been sweeping aside all in front of them. Unbeaten in eight, seven wins and seven clean sheets and a most un-Racing like resolve.
Yesterday afternoon in Rosario, Racing did not start particularly well and it was Central who looked more likely to score. However, a large stroke of luck on the brink of half time gave La Academia the breakthrough and they didn’t look back. Ezequiel Videla’s volley came back off the upright and no one appeared to notice that Gastón Díaz was waiting in an offside position to tap in the rebound.
The goal was a gift but from then on there was only one side in it and Racing toyed with their hosts. As the pressure grew, the influential Diego Milito twice found himself through on goal and on both occasions he left Mauricio Caranta with little chance.
Milito’s impact on this side cannot be understated and the veteran striker may well be about to lead them to championship glory, 13 years after he was part of the side that lifted the 2001 Apertura.

Tigre recorded back-to-back wins to leapfrog Atlético Rafaela as they look to end the season on a positive note. Despite Juan Eluchans giving Rafaela the lead after 15 minutes, Tigre came back strongly and equalised within two minutes. Facundo Sánchez beat Esteban Conde to a hanging ball into the box to nod Tigre level and shortly after half time, Gabriel Peñalba fired them in front. With two minutes remaining, Carlos Luna wrapped up the victory with a tidy finish from the edge of the box.

Any hope that Banfield manager, Matías Almeyda might do his old side a favour was quickly extinguished as his current team made life very difficult for River from kick off. A battling first half performance was capped off by a moment of individual brilliance by Nicolás Bertolo when he burst between Gabriel Mercado and Ezequiel Cirigliano before curling a superb finish beyond Marcelo Barovero and inside the far post.
However, River came back out after the break with a renewed vigour, as they have so often this season and it took only 8 minutes for them to be level. Fernando Cavanaghi, a half time substitute, drilled in from range to bring up his 100th goal for River.
Moments later, River led when Carlos Sánchez headed in from an Augusto Solari cross but the drama did not end there. Osmar Ferreyra was shown a second yellow card, reducing River to ten men and almost immediately after Santiago Salcedo equalised from the penalty spot.
A draw would have seen River’s title challenge over but when Solari’s jinking run into the Banfield penalty area was abruptly ended by Nicolás Bianchi, Cavanaghi stepped up to fire River back into the lead.
Ten-man River held on for all three points and will challenge Racing until the end. It appears that they will request that the final fixtures are moved until the following weekend on December 14th due to the Copa Sudamericana Final so we may need to wait a little while for the key fixtures.

Lanús really should have been with River and Racing for a final day title showdown but a remarkable final few minutes in La Forteleza saw Guillermo Barros Schelotto’s side through away the points against Boca Juniors.
Lautaro Acosta put Lanús in front with barely a minute on the clock and when the same player was on the end of a delightful passing move to double the lead before half time, the match looked over.
However, Emanuel Insua smashed in a goal back with 15 minutes remaining to set up the come back. Insua was then sent off but still Lanús could not stop Boca and in the 88th minute, Jonathan Calleri stroked in the equaliser to end Lanus’ title hopes.