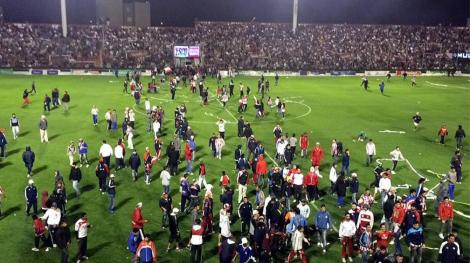 Sarmiento de Junín celebrated becoming the latest side to gain promotion to AFA’s new 30-team Primera División in 2015. Their goalless draw against already-promoted, Unión de Santa Fe, was enough to end their 32-year-spell outside the top flight. The match was slightly overshadowed by crowd trouble as the locals were eager to celebrate their own sides promotion and eventually the referee opted to call the match short by a couple of minutes after a pitch invasion from Unión supporters halted proceedings. The players were then forcibly stripped as supporters wanted to get their hands on a souvenir of the promotion. Once safely back in the changing room, Sarmiento could celebrate themselves and the 2015 Primera is now beginning to take shape.