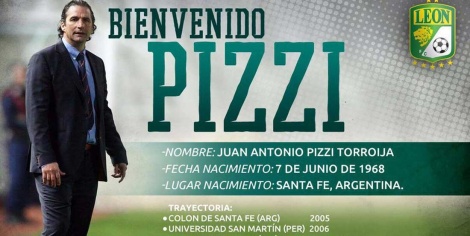 Juan Antonio Pizzi was announced as the new manager of Liga MX side, León yesterday having been out of work since leaving Valencia in July. The Argentine born, former San Lorenzo boss will step into the very large shoes of Uruguayan manager, Gustavo Matosas who left León after their failure to qualify for this season’s Apertura playoffs. Matosas has led La Fiera to promotion to the top flight and then back-to-back title triumphs.

The club who have Carlos Slim as one of it’s major shareholders announced on Twitter: “We officially announce the arrival of Juan A. Pizzi as the new coach of Mexico’s Leon!”

It is a fresh challenge for Pizzi after the disappointment of his spell with Valencia. Following a lengthy playing career in Spain and his decision to represent Spain, Pizzi has proven himself as a very capable manager, winning the 2013 Inicial with San Lorenzo after winning the Chilean league with Universidad Católica in 2010.

Pizzi takes over a talented León squad and will simply be tasked with recapturing the Liga MX crown that they let slip this season.