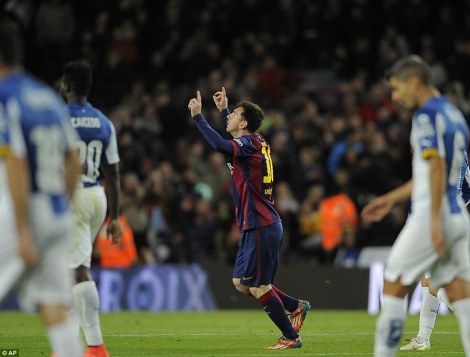 Lionel Messi completed his third hat-trick in four matches as Barcelona came from behind to see off city rivals, Espanyol. It was Messi’s 29th career hat-trick and his 21st in La Liga, two behind Ballon d’or rival, Cristiano Ronaldo but importantly it gave Barcelona a much needed win in the derby and moved them up to second in the table.

Sergio García’s well taken individual goal had given Espanyol a surprise early lead and although Messi came close to equalising when his free kick came back off the crossbar eventually the 27-year-old found the breakthrough. On the stroke of half time, Barca worked the ball to Messi on the edge of the box and after taking a touch, he effortlessly passed the ball into the bottom corner with his left foot.

Shortly after the break, Messi did it again. This time, Luís Suarez passed the Argentine captain the ball and after a heavier than normal first touch, he poked the ball through the legs of Juan Fuentes before rifling the ball past Francisco Casilla with his right foot.

Barcelona were now in control and after Gerard Piqúe headed a third and Pedro slotted in a fourth it was left for Messi to complete his hat-trick. Running from deep, committing defenders and quickly exchanging passes with Pedro before stroking the ball into the net from close range, looks the most simple thing in the world given the number of times we have seen Messi do this now but it remains a skill of the highest level.

Messi still trails Ronaldo in this season’s scoring charts and Barcelona still trail Real in the league table but if Messi continues in this rich vein of form then Barca remain a very dangerous proposition.