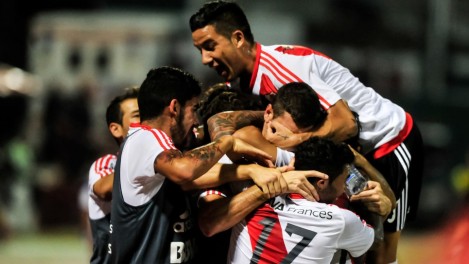 Lucas Alario’s late goal in the Monumental handed River Plate a vital victory over Independiente as Marcelo Gallardo’s side aim to kickstart their title challenge and keep pace with Rosario Central.

With neither side having won since the opening weekend, both River Plate and Independiente were desperate for three points; anything less and in this short championship the gap to the leaders may already be too much.

The attacking intent from both sides was there but neither were able to carve out the clear chance needed to gain the initiative. Both goalkeepers had been called upon but more often that not to swat away efforts from range until the 84th minute when Independiente keeper, Diego Rodríguez failed to hold Lucas Alario’s initial header and allowed the striker to smash the ball into the roof of the net.

The relief in the Monumental was obvious and with little time to respond Independiente slumped to a second league defeat of the season. River are now just five points off the top and can look to push on from this position while Mauricio Pellegrino finds himself under increasing pressure. The title challenge that the club had openly aimed for may already be out of reach.