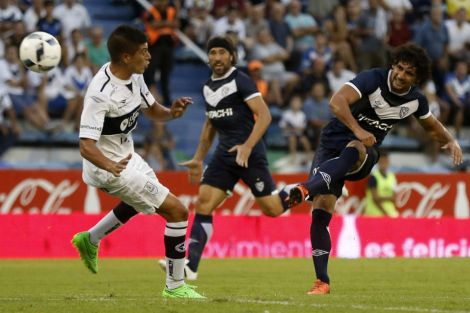 Vélez Sarsfield looked utterly hopeless not too long ago and the discussion centred around when rather than if El Fortín would be relegated. They are a long way from safety next season but Cristian Bassedas deserves enormous credit for steering the club back in the right direction. Gimnasia were the visitors to Liniers on Monday night and Vélez’s spirit was evident once more as debutant Santiago Stecaldo snatched an injury time winner. Blas Cáceres had given the home side the lead with a wonderfully taken goal, assisted by the increasingly impressive Hernán Toledo, but when Walter Bou equalised during the second half it appeared they may need to settle for a share of the points. Gimnasia’s woeful disciplinary record continued late in the game as Federico Rasic and Maxi Meza were both sent off and with the game in stoppage time, Stecaldo’s free kick eluded everyone and sneaked inside the post.

Temperley recorded back-to-back victories after defeating Tigre, who are still yet to win under new manager Mauro Camoranesi. Gonzalo Ríos headed the home side into an early lead and Cristian Chimino doubled the lead from the penalty spot after 25 minutes when Emiliano Papa gifted the opportunity with a senseless handball. Chasing the game, Tigre ended the match with ten men after Santiago Izaguirre was shown a second yellow card and for a second game in a row they fell to a two-goal defeat.