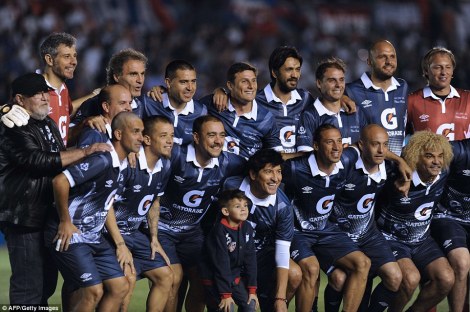 Uruguay and Nacional icon, Alvaro Recoba called time on his 22-year long career on Thursday evening in the Gran Parque Central stadium. Aside from tributes from Uruguyan president Tabare Vazquez, and video messages from Luis Suárez and Zlatan Ibrahimovic there was a match between Nacional and a ‘Friends of Recoba XI’ which included Juan Román Riquelme, Javier Zanetti, Marcelo Gallardo, Carlos Valderrama, Andres D’Alessandro and Ivan Zamorano to name a few.

Recoba played a half for both sides and it rightfully ended 4-4 with the tribute itself obviouslty far more important than matters on the pitch. Recoba scored from the penalty spot during the second half and Riquelme chipped in a panenka but more than anything else, the event highlighted El Chino’s importance to both Uruguay and Nacional.

Recoba won two league titles with Nacional but it was his move to Inter Milan in 1997 for which he is best known in Europe. El Chino debuted in Italy alongside Ronaldo and stole all the headlines with two fabulous goals to give Inter a 2-1 win over Brescia.

The Uruguayan went onto make almost 250 appearances for Inter and lifted two Serie A titles, two Coppa Italia’s and the UEFA cup before eventually finding his way back to Nacional.