Continuing our look at the best young players in Argentina, we now reveal positions 30 to 26 (in case you missed them 50-41 and 40-31 are available here). All the players are eligible to play in the Olympic football tournament (born on or after 1 January 1993) and do not have to be playing their club football in Argentina. Debate between several of the Hand of Pod team has narrowed it down and as we get deeper into the countdown, some expert opinion will throw a bit more light on choices.

Here is the third part of the Golazo Argentino Best 50 youngsters, positions 30 to 26….

Another diminutive, skillful dribbler hailing from Santa Fe province, Fede Cartabia was spotted by Juan Antonio Pizzi at thirteen and travelled to Spain for trials with Barcelona and Valencia – Los Che wasted no time in incorporating the teen into their academy and he has since been developing away from his homeland. The trajectory has sadly not been as meteoric as Argentina’s most famous footballing export (for the benefit of those utterly clueless, I mean Lionel Messi) but Cartabia has still shown flashes of his obvious talents in La Liga.

Despite Pizzi joining Cartabia at Valencia as manager, the path to the first team was often blocked. Due to his inconsistency a loan deal was favoured and 2014/15 season was spent out with Córdoba CF. A first season back in Spain’s top flight in 42 years was always likely to prove testing for Los Califas but Cartabia shone as the side’s number ten. Often starting out on the right, the youngster is a direct runner who looks to cut inside onto his powerful left foot and as such poses a goal threat even from distance.

Córdoba’s relegation meant there was no way they could sanction a permanent deal and so this season, Cartarbia finds himself again in the bottom half of La Liga with Deportivo de La Coruña.

Yet to truly find his place with Dépor, Cartabia still has much to prove but having at least rejected the opportunity to represent Spain at youth levels, it would appear Argentina needn’t worry about him defecting.

David Cartlidge – beIN sports/FourFourTwo @davidjaca – “Fede Cartabia’s season so far has been like much of his career so far, flashes of brilliance but an overall lack of shape to his game. Fede needs to humble himself a little, only then will his game progress and potential become fulfilled.”

The reliable Marcelo Barovero has so far blocked 19-year-old Augusto Batalla’s path to the River Plate first team but it has not prevented the young goalkeeper from gaining a formidable reputation that has had Real Madrid strongly linked over the past year.

In 2011, having already caught the attention of coaches whilst playing for River’s youth sides, Batalla travelled to Uruguay for the under-15 Sudamericano. Finishing third in the tournament proved to be the beginning of a long running connection with La Albiceleste and cemented his position as number one but it was in 2013 when Batalla’s potential really surfaced. The Argentina under-17s lifted the Sudamericano on home soil and the young keeper shone as River won the World Club Championships in Spain. The penalty hero against Barcelona in the semi-finals prompted Batalla to be named goalkeeper of the tournament and from there began the links with some of the biggest clubs in Europe.

Batalla has remained Argentina’s most highly rated young goalkeeper and added the under-20 Sudamericano to complete a hat-trick of honours through the various youth divisions.  An agile shot stopper and decent penalty box presence, Batalla now needs to add some playing time at club level to his CV.

Barovero has justifiably been an immovable object in the River goal over the past seasons while success has flowed but with the 31-year-old looking set for a move to Mexican club Veracruz in June, Batalla may well have opportunities ahead in the not too distant future.

Argentina Under-20 coach Humberto Grondona: “A goalkeeper with a brilliant future. Augusto has everything he could need to continue making progress. It is not just that he has the footballing qualities that make him stand out from the rest, but also that as a person he is very mature for his age.” 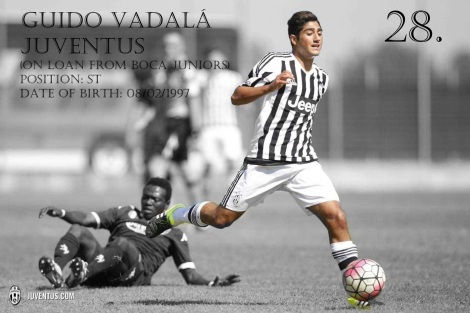 Carlos Tevez’s remarkable transfer to Boca Juniors was the moment that the majority of the footballing world first heard of Guido Vadalá. Serie A giants Juventus opted to take the 18-year-old striker as part of the deal that saw El Jugador del Pueblo triumphantly return to La Bombonera but Vadalá’s exploits for the Boca youth sides had already caught the attention of many Bosteros.

Yet another Rosarino, Vadalá had previously travelled to Europe in his early teens for trials with Barcelona’s famed Masía and later a spell with Italian club Atalanta before settling back in Buenos Aires with Boca at the age of fifteen. Quick, skillful and an accomplished finisher Vadalá proved to be an utter goal machine in the youth ranks. In 2013, Vadalá scored 32 league goals for the Boca under-17s earning him an award from the AFA as the highest scorer in the entire Argentine football system but it was his seven-goal haul in a single match against Argentinos Juniors during the following season that snatched the headlines.

These performances earned the teenager a place among the Boca senior squad for 2015 and he made an impressive debut in the Copa Libertadores as a late substitute against Palestino. Despite only making two appearances in the blue and gold, when Juventus were negotiating with Boca over Tevez, Vadalá was the main target for the bianconeri.

Boca were never going to be able to afford a transfer fee so the 18-year-old switched to Turin on loan but with the Italian club having an option to make the move permanent. It remains to be seen if this transfer will come to fruition but whether Vadalá returns to Boca or not, the striker remains a player of enormous potential.

Tom Robinson – Outside of the boot/Just Football @tomrobbo89  – “A diminutive support striker with scintillating skills, Vadala has long been heralded as a star in the making. Formidable youth record and inevitable Messi comparisons aside, we’ve yet to really witness ‘Chiche’ in full flow and as such he can still only be spoke of in terms of potential. Hopefully the move to Italy proves to be a smart decision for his long term development.”

Time will tell if Bruno Zuculini’s transfer to Manchester City from Racing in 2014 proves to be a wise career move but in spite of the 22-year-old’s struggles with his perennial loan status since, there remains a talented midfield player full of promise.

A product of Racing Club’s fine academy, Bruno Zuculini made his first-team debut two months shy of his seventeenth birthday, on the heels of his older brother Franco, who was still with the club at the time. Profiting from an injury to club captain Claudio Yacob, Zucu impressed the supporters in the Cilindro with his firm and determined tackling but equally his underrated ability to initiate attacks from deep.

Ten goals from his short time with Racing display that there is certainly more to Zuculini’s game than simply a ball-winning defensive midfielder but at this stage in his career, minutes on the pitch are crucial to his continued development. In the two years Zuculini has been a City player, the youngster has had relatively unsuccessful loan spells with Valencia and Córdoba in La Liga, Middlesbrough and now Greek side, AEK Athens.  Racing and River both enquired about the possibility of bringing him back to Argentina in the recent January  window, with City preferring he remained in Europe.

As a regular throughout the Argentina youth system and still only twenty-two, Zuculini still has plenty of time to establish himself but as many young players have discovered doing so at one of the wealthiest clubs in Europe isn’t easy.

Dan Edwards – Goal.com, The Blizzard @DanEdwardsGoal “A dynamic, aggressive young midfielder, Bruno Zuculini is a much better footballer than his career to date in Europe suggests. The younger brother of Franco started as a defensive No. 5 at Racing, but slowly developed into a more attacking player and was in fine form when Manchester City swooped for his signature in 2014. If he can find the right stage to show his best football, there is a bright future yet for ‘Zucu’.” 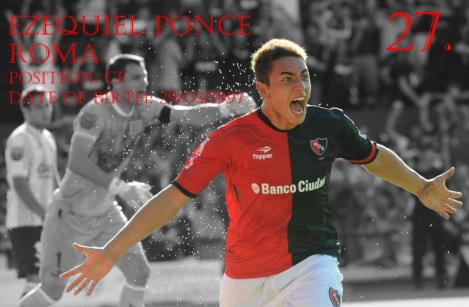 When Newell’s Old Boy’s manager Alfredo Berti summoned the then 16-year-old Ezequiel Ponce from the bench in the 88th minute of La Lepra’s Primera clash with Quilmes, the teenager entered the record books as the youngest player to make his debut for the club. In a football crazed city like Rosario that is some feat and illustrates just how highly El Tanque was valued and how much potential he has.

Perhaps it could be argued circumstance gave Ponce his break as Newell’s found themselves short of firepower after the sale of Ignacio Scocco to Internacional and while there is some truth in that, the teenager took full advantage and rarely looked out of place at senior level. Berti knew exactly what he was getting from the powerful centre-forward having been promoted to manager from Newell’s academy coach and watching Ponce plunder 35 goals during the 2012 under-15s season.

Frequent substitute appearances slightly skew his underwhelming looking return of five goals from 27 appearances in the black and red of Newell’s but it was far more than goals that had European scouts circling soon after his debut.

The number nine role in a league which despite not being the most technically advanced is as physical as they come, is not an easy one and even more so when you are still sixteen. Ponce showed the maturity, ability and strength to handle all that was thrown at him and in holding the ball with his back to goal, occupying defenders and bringing teammates into play, he displayed an all-round game that is rare in a player so young.

A metatarsal injury during pre-season before the Torneo Transición meant Ponce missed much of the campaign but it did not prevent Roma from nipping in under the noses of Tottenham to seal a €5 million deal before loaning the youngster back to Newell’s for the remainder of 2015. Barring a well-taken goal against San Lorenzo, the loan didn’t provide many highlights and so Roma recalled Ponce earlier. The 18-year-old is yet to get his chance for the senior side but three goals and four assists from five matches for Roma’s under-19s suggest that the Giallorossi could still be sitting on something very special.

Sam Kelly – ESPN, When Saturday Comes, The Blizzard @HEGS_com “Ponce is clearly a talented player, and his hold-up play and ability to bring team-mates into the attack are good assets for his age. He still has to improve on his finishing – a record of about a goal every five games isn’t great for a centre forward – but at just 19 years old, he’s got time to work on that.”