There is no coincidence that perhaps the two greatest footballers to have graced the earth hail from Argentina; almost since the British first brought football to the banks of the Rio de la Plata, it is has been a national obsession. The stream of young talent from around the country is almost constant and despite obviously not matching the transcendental talents of señores Maradona and Messi, there are several poised for great things with La Albiceleste.

In an Olympic year, we look at some of the best Argentine players eligible to play in the tournament (born on or after 1 January 1993) and attempt to compile something of a top 50. Debate between several of the Hand of Pod team has narrowed it down and as we get deeper into the countdown, some expert opinion will throw a bit more light on choices.

Here is the first Golazo Argentino Best 50 youngsters, starting with positions 50 to 41….

Many would have questioned the thinking behind Estudiantes’ decision to allow Gastón Gil Romero to leave the club for Rosario Central over the summer but during the initial summer friendly against Racing, Nelson Vivas gave a glimpse of his replacement – 19-year-old Santiago Ascacibar. The academy product’s assured performances in central midfield suggested he was ready for first team action, and although it was his tackle that sparked the preseason brawl with Gimnasia, he hasn’t disappointed. A superb ball winner, Ascacibar is one of the top tacklers in the division and his simple and effective passing has given El Pincha a strong foundation.

Vélez Sarsfield have a great reputation for producing talent but all too often these young players fail to live up to their early promise. During a period in which the club is leaning heavily on it’s academy, Hernán Toledo appears to be the pick of the bunch and has been in dazzling form at the start of this season. Full of pace and trickery, Toledo has been vital to El Fortín’s attack – from the 9 goals scored so far, Toledo has scored one and made four, leading the Primera in assists. His solo goal against Argentinos Juniors captured his superb balance and ability to beat players and at twenty, if he maintains this form, a move away from Liniers looks certain.

Recent Independiente signing Emiliano Rigoni had been with Belgrano since the age of twelve, steadily progressing through their youth ranks until making his debut during the 2013 Torneo Inicial. The 22-year-old midfielder became a central part of Ricardo Zielinski’s attack providing natural width on either flank or pace and creativity through the middle. Strong with both feet, Rigoni scored four times in 2015 as La Celeste finished sixth and although his slender frame is perhaps not the most robust, his rapid acceleration and technique make him a real threat. Understandably Belgrano were loathed to see him leave, particularly with Lucas Zelarrayán departed for México, but El Rojo finally got their long-term target and Rigoni has already begun to produce the goods in Avellaneda. 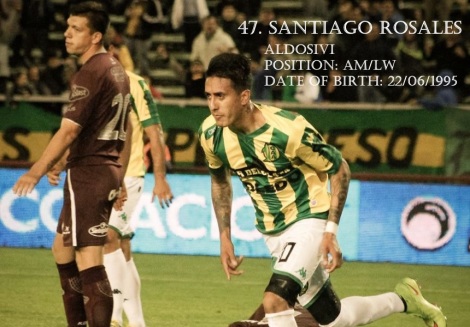 Something of a latecomer after being rejected at a young age by Lanús and Boca Juniors, Santiago Rosales is making up for lost time now down in Mar del Plata. When Aldosivi play well and win it is invariably when Rosales is on his game as his ability to unlock defences gives El Tiburón a cutting edge in the final third that they can otherwise lack. Picked up by the club from an open trial only three years ago, Aldosivi have benefitted enormously from the bigger Buenos Aires clubs overlooking his talent. Rosales was a central figure in their promotion and doesn’t look out of place now in the top flight.

It is little surprise that Erik Godoy has managed to cement himself as a regular in the Primera for Tigre as the young right-back has been a central component of Gustavo Alfaro’s sturdy defence. A respectable tenth placed finish was built on the fifth best defence in the league and Godoy’s positioning and understanding of the role was a contributing factor. Versatile enough to play across the back four, the 22-year-old has filled in for Alfaro on numerous occasions and an eventual switch to one of Argentina’s bigger clubs could be the next step in his career. 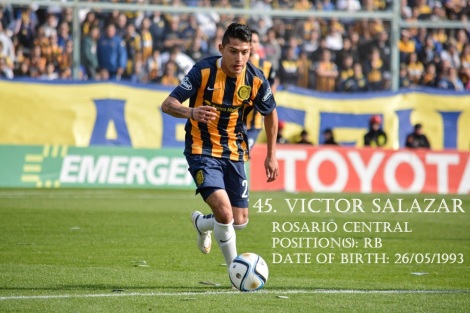 It’s a pretty good time to be associated with Rosario Central and aside from Eduardo Coudet bringing in some superb experienced players, El Canalla have utilized a number of outstanding young talents. The likes of Cervi and Lo Celso may steal the headlines but right back, Víctor Salazar has been sensational since breaking into the first team. A fierce competitor, quick and a willing outlet in attack, Salazar has all the attributes one wants in a full-back. Vying with the experienced Pablo Alvarez on the right, El Tucu provides Coudet with the depth needed to compete in the Copa Libertadores. Spanish newspaper, AS named Salazar the eighth most promising young player in Argentina last year and Gerardo Martino has already singled him out for praise.

No relation to that other Tevez but ironically it was in La Bombonera where young Mauricio burst onto the Argentine football scene. A powerfully struck shot from distance gave Newell’s Old Boys a famous victory away to Boca and during 2015, Tévez deomstrated that it was no flash in the pan. A natural wide player, the young rosarino is blessed with electrifying pace and a directness that opposition defences loathe. With the same agent that Angel Di María had when he moved from Central to Benfica, Tévez may be spying a similar move in the near future. 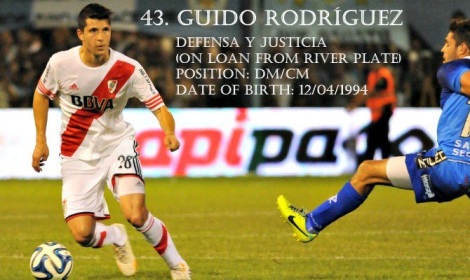 River Plate’s academy is world renowned but breaking into the first team can be difficult and although Guido Rodríguez had shown flashes for Los Millonarios, opportunities were limited. In need of playing time, a loan move away to Defensa y Justicia was beneficial and it is no coincidence that El Halcón are currently enjoying one of the best spells in the club’s history. A powerful ball winner in midfield, Rodríguez is a good passer of the ball and a driving force from deep. River remain fairly well stocked in central midfield but with such a high-turnover of players, Marcelo Gallardo’s side should be reintegrating a much improved Guido Rodríguez into his side. 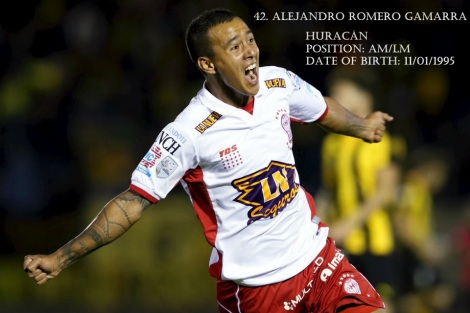 Named by the AFA as the most promising youngster in Argentine youth football in 2013, Alejandro Romero Gamarra has perhaps not developed quite as much as many had forecast. Injury has hampered his progress and as a result chances at Huracán have been difficult to come by. His talent though remains unquestionable whether it be as a central playmaker or wide on the left making the most of his pace, trickery and fabulous left foot. 2016 looks set to be an important year for the 20-year-old and judging by his thunderous golazo against Peñarol in this year’s Copa Libertadores, Romero Gamarra is ready to kick on. 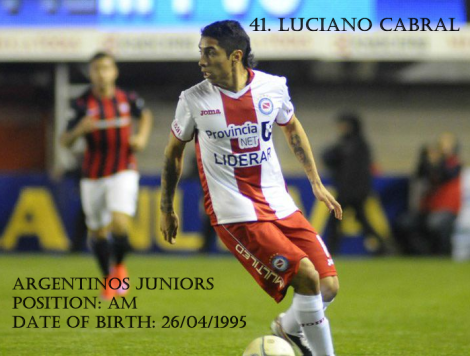 At this stage it appears likely that Luciano Cabral will never pull on the Albiceleste shirt, not through any lack of talent but because the youngster has opted to represent Chile, the nation of his grandfather, at under-20 level at least. The Argentine-born enganche has been a regular at Argentinos Juniors during the Torneo 2015 and although the inconsistency of youth has been evident, so too has Cabral’s wonderful first touch and vision. Argentina would be wise to try and convince Cabral that his future lies with them and avoid the risk of missing out.