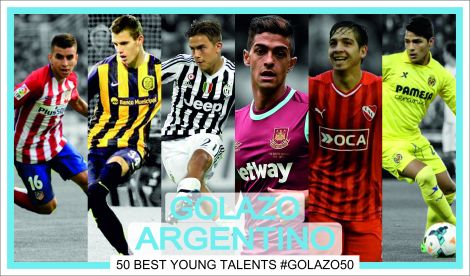 Continuing our look at the best young players in Argentina, we now reach number nine. In case you missed it here is a recap so far:

Without even kicking a ball for the River Plate first team much was written about young defender Emanuel Mammana after he followed in the esteemed footsteps of another River graduate, Javier Mascherano and made his international bow before his senior club debut. Now, after only 24 apperances a €9 million move to Serie A side Fiorentina beckons and the 19-year-old, who many foresee as a cornerstone of the Albiceleste defence, must continue his progression.

An elegant, ball-playing defender it is easy to see how Mammana was initially played in midfield after being picked up by River’s famed academy at a young age. Gradually dropping into the heart of defence, Mammana has shown the leadership qualities and tactical and positional strength to marshal the backline for both River and Argentina.

Perhaps the youngster’s leadership and mental toughness is a byproduct of losing his parents while still a teenager in River’s academy, as in the same year as the death of his father, Mammana represented Argentina under-15s in the Sudamericano and this proved to be the start of a vital relation with the national side. In 2015, the under-20s lifted the Sudamericano but Mammana had already announced himself on the footballing map after Alejandro Sabella had been impressed during the pre-2014 World Cup training camp and awarded the then 17-year-old with a fifteen minute cameo against at the end of the warm-up match with Slovenia. Poetically, Mammana replaced the only other player to have featured for Argentina before making their club debut, Javier Mascherano.

A mainstay for the Argentina youth sides, Mammana has been used sparingly by Marcelo Gallardo at River but given his versatility to also play at right back was an important squad member in the Copa Libertadores triumph.

A decent burst of speed and wonderful technique make Mammana a more than capable understudy at full-back but his reading of the game and organization make him a natural centre back. At this early stage in his development there is certainly still room for improvement as the 19-year-old is still prone to the odd individual error. Usually caused by his uncompromising belief in playing the ball out from the back, Mammana is not the finished article yet. Provided this element to his play is gradually phased out and he continues to develop both physically and positionally, Mammana’s potential has no limit.

Sam Kelly – ESPN, When Saturday Comes, The Blizzard @HEGS_com “Emanuel Mammana is a gifted young defender with an excellent reading of the game, and could have really shone in River Plate’s defence this past campaign if he’d had a more regular centre back partner. Blessed with good timing in the tackle, and a full Argentina international before he’d even made his River debut, he should be a key figure for the team aiming for Gold at the Rio Olympics.”