Continuing our look at the best young players in Argentina, we now reveal positions 40 to 31 (in case you missed it 50-41 is available here). All the players are eligible to play in the Olympic football tournament (born on or after 1 January 1993) and do not have to be playing their club football in Argentina. Debate between several of the Hand of Pod team has narrowed it down and as we get deeper into the countdown, some expert opinion will throw a bit more light on choices.

Here is the second part of the Golazo Argentino Best 50 youngsters, positions 40 to 31…. 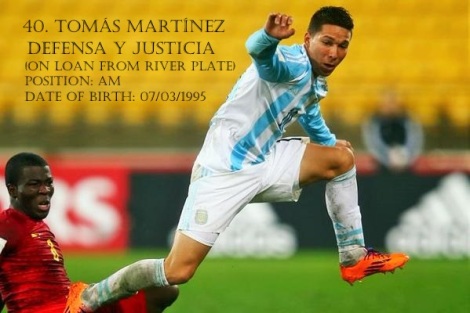 Competition for places at River Plate in the ‘number ten’ role whether it was Manuel Lanzini or Leonardo Pisculichi has seen Tomás Martínez struggle for playing time at the Monumental but don’t doubt the 20-year-old’s talent. A gifted playmaker, Martínez finds those pockets of space in front of the opposition defence and possesses the skill to beat his marker and the awareness to create chances. River does not need any reminder of this and when he signed his first professional contract in 2011, a clause of $10 million was inserted to ward off interest from Arsenal and Barcelona. His loan this season to Defensa y Justicia has been central to El Halcón’s impressive start and is proving a good step in his development. 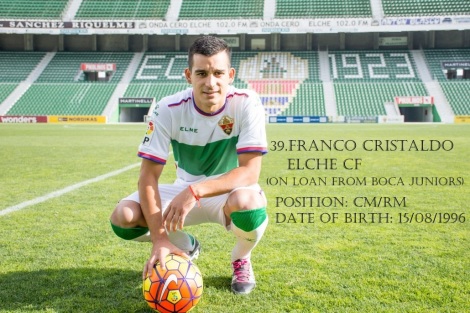 The first graduate of Boca Juniors’ famed academy to appear in the list, Franco Cristaldo had been knocking on the door of the Boca first team throughout 2015 since scoring the winner against River in Mendoza and opening the scoring in the famous 5-0 summer superclásico victory a week later. A direct runner from midfield with bags of pace, Cristaldo is always looking to join the attack and despite struggling for playing time at La Bombonera, his talent didn’t go unnoticed. Currently on loan with Segunda División side, Elche, Cristaldo’s move to Europe came earlier than expected and although he has had to settle for more of a substitutes role, he may yet help Los Franjiverdes push for promotion.

For now Argentina can rest easy in the knowledge that José Mauri has rejected Italy’s advances after initially representing the Azzurri at under-17 level. A recent under-20 call was spurned and Mauri has officially said that he will wait for his country of birth. The 19-year-old left Argentina as a teenager to sign for Parma and despite the Italian club’s plight and resulting relegation, Mauri shone in the centre of midfield. Industrious and combative while displaying an underrated creativity, even at his tender age, Mauri displayed impressive versatility. A move to AC Milan has seen a real lack of playing time but a player of enormous potential remains.

Hailing from the northern city of Santiago del Estero, José Luis Gómez has progressed through the youth ranks of Avellaneda giants, Racing Club after being initially rejected from Quilmes and San Lorenzo. His nickname El Cafú santiagueño is an indication of the type of player the 22-year-old is and this season it is Lanús that are benefitting. A seemingly indefatigable bundle of energy, Gómez races up and down the right wing with the pace and directness more associated with a winger. Certainly his attacking attributes outweigh his defending at this stage, which is why he could just as easily play in midfield, but as a modern full back, Gómez ticks a lot of boxes. A bright start to 2016 with Lanús, after impressing last season on loan at San Martín, Racing appear to have an excellent prospect on their hands.

Born in Mar del Plata but based in Spain now for a number of years, pacy attacker Emiliano Buendía has dual nationality and has represented both Spain and Argentina at youth level. After being called up to play for the Spain under-19s at the same time as being promoted to the Getafe senior side, La Albiceleste feared they could be set to miss out and promptly named Buendía in their squad for the under-20 for the World Cup in May. Only eleven apperances in La Liga this season but a first senior goal in Spain highlight the 19-year-old as one for the future. Having also recently featured at right back, Buendía is showing the maturity and versatility that many of the same age lack.

One of the prized assets in Boca’s youth system, Los Xeneizes moved swiftly to pluck Cristian Pavón away from his home town club Tallares de Córdoba less than a couple of years ago. In order to seal a deal with Colón to sign Marcelo Meli, Pavón was immediately sent out on loan and shone with the Sabaleros in the Nacional B. Some fabulous goals cutting in from the left onto his right foot appeared to vindicate Boca’s decision to spend relatively big on the youngster and he has now returned to La Bombonera. The Argentina under-20 international has found breaking into the first team difficult and at this point perhaps another loan move away would be beneficial.

Arriving at Marcelo Gallardo’s River Plate as the number one transfer target for a hefty fee of $4.5 million it is easy to feel slightly underwhelmed by Pity Martínez’s River career to date. Inconsistency has plagued his time in the Monumental and for every match where the 22-year-old looks unplayable there is another where he drifts by fairly anonymously. On his day it is clear why River paid Huracán the money they did – full of trickery and pace and with a wonderful left foot, Martínez is capable of producing individual moments of match winning quality. If he can begin to do this on a more regular basis then River will see a hefty profit on their investment.

The jewel in Argentina’s current crop of under-17s, captain Tomás Conechny has been touted for big things after scoring freely at all levels of youth football both internationally and for his club San Lorenzo. Hailing from the Patagonian city of Comodoro Rivadavia, Conechny is the admirable blend of determination and technique and in addition to leading Los Pibes on the pitch he was part of the San Lorenzo reserve side that won the league title last year. Pablo Guede is yet to put faith in the 17-year-old but Conechney may yet push for a place in the first team during a busy 2016 schedule. Conechny is the youngest player in the list. 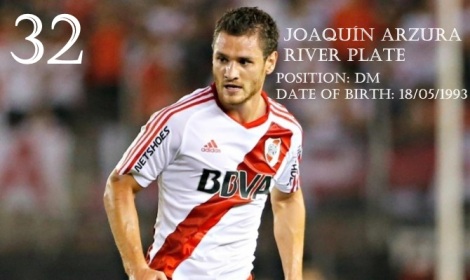 River Plate’s Joaquín Arzura has already clocked up plenty of playing time in the Primera since breaking into the Tigre side at the end of 2011. Since the 2013 Inicial, a regular starting role has been established and so Arzura already has over 70 appearances under his belt. A tough tackler built more for breaking up play rather than elegantly creating attacks from deep, do not expect goals or assists from the 22-year-old. However, that doesn’t diminish his importance and when River were shopping for a replacement for Matías Kranevitter, it was no surprise that Arzura was their number one target. A little more destructive than Kranevitter, it will be interesting to see Arzura at the heart of Gallardo’s midfield. 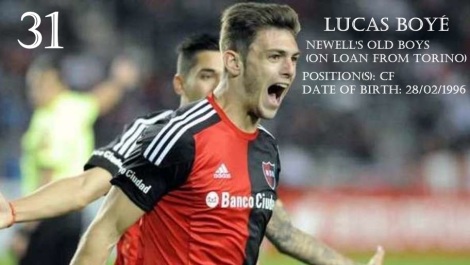 Despite being played continually out of position by Newell’s, 19-year-old Lucas Boyé has earned his move to Europe with a deal already in place for the striker to join Torino in June. Whatever anyone else thinks, Boyé is a centre forward and in this position is a player of enormous talent; stuck out wide, Torito looks very average, but beating defenders and playing the role of provider is not really his bag. An excellent finisher and able to play with back to goal to bring others into play, Boyé is a number nine and if given the opportunity to develop in this role, he could have a very bright future. A product of the River academy, the path to the first time was often blocked and so the youngster was loaned to Newell’s, as part of the Milton Casco transfer. Torino have moved early for his signature and Boyé’s talent is now beginning to stand out in the current Newell’s side.