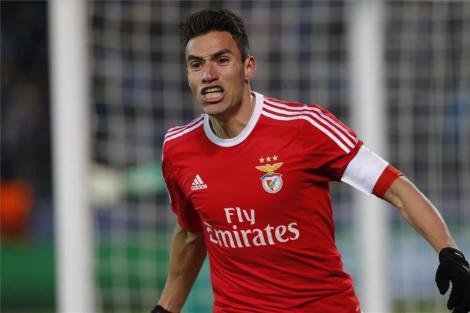 Argentina international Nicolás Gaitán appears to be leaving Benfica following years of speculation after Atlético Madrid reached an agreement to sign the 28-year-old for €25 million.

The former Boca Juniors playmaker has been linked with Atléti for a while with coach Diego Simeone being a huge admirer of his fellow countryman’s creativity and versatility in attack. With several other clubs interested in Gaitán, Los Colchoneros have moved fast to tie up a deal just days after the Portuguese giants completed a league and cup double.

Gaitán has enjoyed another superb season in Lisbon, scoring 11 times and adding 19 assists en route to a third league title in six years with the club. After more than 250 appearances with the Águias, an emotional Gaitán told reporters after being substituted in the league cup final: “Many years at this club, they have treated me very well and the end is very near.”

Named this week as a member of Argentina’s Copa América squad, Gaitán has been a vital part of the Benfica side since joining from Boca Juniors in 2010 for €8.4 million.

Barely a transfer window has gone by in recent seasons without Manchester United being linked to the Argentine but Diego Simeone has always held a similar interest and was suitably impressed when Atlético faced Benfica in this year’s Champions League.

Gaitán becomes the first signing of the transfer window and despite the hefty price tag, the switch to Los Rojiblancos will be an opportunity to shine in Spain and in European competition.