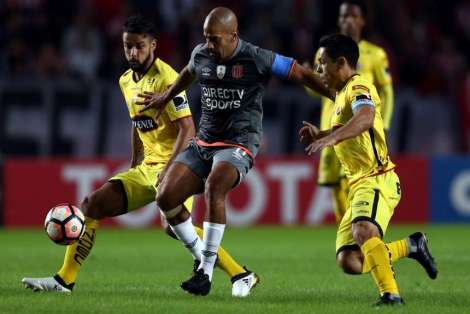 Three years after hanging up his boots, club president Juan Sebastián Verón made his return to the pitch for Estudiantes but even the iconic midfielder couldn’t prevent El Pincha falling to defeat against an impressive Barcelona side.

It was the sight that everyone wanted to see after Juan Sebastián Verón promised he would play in the Copa Libertadores if boxes at the new stadium were sold and although there was something joyous about old Brujita lining up in midfield with Santiago Ascacibar, a player born three years after Verón’s initial debut, the result makes chances of progression, from a very difficult group, slim.

Jefferson Mina gave the visitors a scrappy lead after half time and although Estudiantes perhaps should have forced an equaliser with Javier Toledo hitting the post, Argentine striker Ariel Nahuelpán wrapped up the victory in stoppage time.

If results go against Estudiantes, Nelson Vivas’ side could find themselves six points off the pace ahead of next week’s critical visit of champions Atlético Nacional to La Plata.