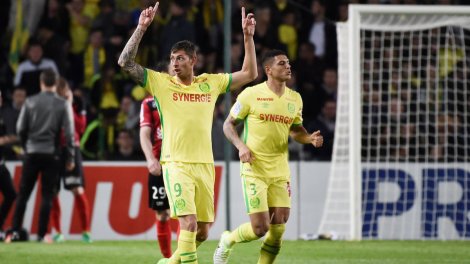 After a weekend that perhaps lacked some of the more recognisable names in Argentine football, Argentinos Abroad returns with a quick recap of some of those who made the news around the globe. Any missed that you feel deserve a mention, feel free to leave a comment.

In Ligue 1, Emiliano Sala’s smart brace took his season tally to an impressive twelve as Nantes beat Guincamp 4-1 in the Stade de la Beaujoire. The 26-year-old, who has played his entire career in France, cleverly flicked in the home side’s second and wrapped up the win with a polished finish from outside the area.

Meanwhile, Giovani Lo Celso provided Paris Saint-Germain supporters with another glimpse of his magic with a sensational pass for Julian Draxler to add PSG’s fifth in a rout against Saint-Etienne.

How about that for vision from Giovani Lo Celso to set up Draxler — 21-year-old Argentine midfielder 🇦🇷 #PSG pic.twitter.com/gZd4lURQXL

Alexander Szymanowski scored his eighth of the Spanish season as Leganes earned a point away to Athletic Club and in doing so ensured their survival in La Liga. The pacy 28-year-old nodded the visitors only goal on the hour mark and it was enough for the draw.

Former Gimnasia winger Pablo de Blasis scored from the penalty spot in Mainz’s 4-2 win over Eintracht Frankfurt to take his Bundesliga goals total to five for the season.

Switching continents now, Ignacio Piatti was once more on target in the MLS but couldn’t prevent Montreal Impact slipping to a 3-2 defeat against Columbus Crew. The visitors had raced into a two-goal lead when the former San Lorenzo playmaker cut in from the left, played a neat one-two and slotted the ball into the net but despite pulling level, the Crew won it in stoppage time.

Things are hotting up in Liga MX and Tijuana’s Argentinian contingent booked their place in the Clausura semi-finals with a 2-0 win over Morelia. With the tie locked at 1-1, Juan Martín Lucero finished off a swift counter to send Los Xolos through to face Tigres.

Toluca still managed to reach the semis despite losing 3-1 to Santos Laguna in their second leg. Enrique Triverio’s own goal gave the visitors the lead and Julio Furch’s close range volley made it 3-1 but Los Guerreros could not find another.

And in Brazil, Cruzeiro opened their Brasileiro account with a 1-0 win over São Paulo thanks to Wanchope Abila’s near post finish.

Internacional made a winning start in the second tier with Andrés D’Alessandro opening the scoring from the penalty spot in a 3-0 win away to Londrina.