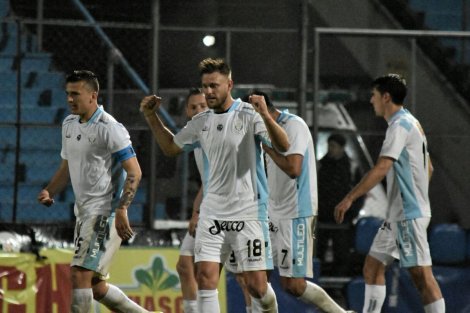 Our man in the Nacional B, Darren Paul returns to give us the low-down on this season’s race to reach the top flight.

With red cards, penalties, rain and goal of the season contenders the Argentine Second Division got back underway last weekend with good results for the promotion favourites giving us a hint of what is to come this season.

Atlético Rafaela sit top of the tree (by goal difference) after their opening night 2-0 win away to Gimnasia de Jujuy. Lucas Pittinari got the scoring underway for the visitors in the heavy rain on the 26th minute after a strong start from both sides. Pittinari finished well to the top corner after a good cut back from the left wing. Manuel Bustos added the finishing touch to the win five minutes from time latching onto a great through ball, rounding and sitting down the stranded keeper before finishing to send his team top of the table and winning a game that was high on action.

San Martín de Tucumán played a close fought game at home to Ferro in front of a passionate crowd at the Estadio La Ciudadela on a beautiful early spring afternoon. San Martín impressed at times last season and an opening day win against a Ferro side that finished in the top ten last time out should send a big message to the rest of the division.

Ferro had the better of the first half chances but the second belonged to San Martin. The only goal of the game was a second half stunner from Juan Galeano; an early contender for goal of the season. The hosts had a corner headed away as far as Galeano on the edge of the area, his first touch bounced the ball to the perfect height and he volleyed the ball hard into the top corner past the helpless Bailo in the Ferro goal. Ferro fans should take great heart from a strong performance undone by one of the best goals you’ll see this year.

Boca Unidos started the season like they spent most of last. Losing. Villa Dálmine, like most clubs in the division, will spend the early part of the season with one eye over their shoulder at the dropzone, given that six teams will be relegated and five teams are starting the season with 0 points in the last three seasons (how promedios is calculated).

A commanding home win on the opening day is just what they would have wanted. Renso Perez opened the scoring just after the half hour mark, a neat tap in at the far post after a jinking run and inch perfect cross from Pablo Burzio on the left flank. On the 69th minute Burzio put the finishing touches on the win finishing from the edge of the area after another brilliant run from midfield. The 24 year old Burzio has kicked his season off with a bang and could be one to watch, hoping to step up from five goals in 19 games last year. Boca’s game went from bad to worse when they repeated another trope from last season, ending the game with ten men. Rolando Ricardone received his marching orders on the 79th minute for a second yellow card.

Estudiantes de San Luis and Aldosivi both won their opening encounters on Saturday. Estudiantes sent All Boys back to Floresta with their tails between their legs following a 2-0 defeat. The hosts got their scored early in both halves with Gaston Ada grabbing the opener after eight minutes. All Boys’ Gaston Garcia netted the second goal two minutes into the second half, putting the ball past his own keeper to give the hosts all three points.

Aldosivi went away to Santamarina and a 2-0 lead at half time with goals from Antonio Medina and Fernando Telechea put the visitors in position to win. Santamarina gave them a scare in the second half as Braian Guille bagged himself a first goal of the season on the 66th minute, but it wasn’t enough and Aldosivi took home the points.

Saturday’s middle game saw Brown de Adrogue leave it late away to Almagro. Former Racing Club midfielder Santiago Naguel grabbed his side an 83rd minute winner before Diego Diellos was sent off for the hosts in the final minute.

Sunday saw four goals in three games with Juventud Unida and Instituto grabbing 1-0 home victories over Flandria and Guillermo Brown respectively. Guillermo Brown, who came so close to promotion last season, were beaten by Ricardo Blanco’s 74th minute penalty and will hope to bounce back next round against Juventud Unida who overcame Flandria with a 45th minute penalty of their own, scored by Ariel Colzera.

There were three draws in the round, with Los Andes and Deportivo Morón kicking off the season on Friday night with a goalless draw. Newly promoted Morón should be pleased with a point from one of the tougher places to visit in the division.

Nueva Chicago snagged a one-all draw at home to Independiente Rivadavia on Sunday, with Federico Fattori’s 77th minute effort cancelling out Jose Luis Mendez’s first half opener. The Monday night game was the clash of promotion hopefuls Sarmiento and Quilmes and both sides will be relieved to take a point from their opening game against promotion rivals.

Round two kicks off Friday night with Atlético de Rafaela hosting Los Andes. The stand out games of the weekend are the Monday night game between Aldosivi and Nueva Chicago and the Saturday clash between Quilmes and Villa Dalmine. Riestra, who are starting with a 20-point penalty and Mitre, who had their opening week fixture postponed will get their first shot at the competition as do Agropecuario who had a week one bye. Sarmiento are the team who have the weekend off in round two.

Darren Paul is a UK based fan of Racing Club, most frequently found waxing lyrical about the first touch of Luciano Aued on a Saturday night. Fan of all tiers, all genders, all forms of the Argentine domestic game.

You can follow Darren on Twitter here www.twitter.com/auedstouch
He also does English commentary on various Argentine matches here www.rabble.tv/users/dfoulkes34/profile
And there is a youtube channel where he discusses the latest Racing news here youtube.com/auedstouch