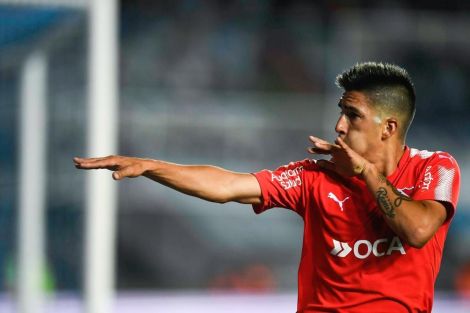 The importance of Independiente’s Copa Sudamericana semi final couldn’t have been made clearer by Ariel Holland’s decision to rest several key players for Saturday’s Clásico de Avellaneda but even a second-string El Rojo managed to claim a 1-0 win over bitter rivals Racing Club.

Independiente need to reverse a first leg defeat to Libertad when the Paraguayans visit Avellaneda this week so Ariel Holan felt compelled to leave out the majority of his starting eleven despite the pressure to perform in one of Argentina’s fiercest derbies.

Racing were coming off an impressive victory in La Bombonera last weekend and repeating that side, Diego Cocca and the supporters in the Cilindro would probably have expected three points.

La Academia almost made a perfect start when Diego González had a goal ruled out for a narrow offside but it was Independiente who struck first. Leandro Fernández nicked the ball from Sergio Vittor and dashed through on goal to rifle past Juan Musso.

The visitors’ joy was short-lived though as young defender Rodrigo Moreira was shown a second yellow card for hauling down Lautaro Martínez. The numerical advantage saw Racing dominate proceedings and while they had struggled to create many chances during the first half, after the break the Independiente goal saw plenty of action.

Lautaro Martínez struck the inside of the post and even after an injury to El Rojo’s second goalkeeper Gonzalo Rehak, Racing couldn’t find the net. Independiente held on for a valuable three points that lifts them to sixth but all focus is on Tuesday.

Earlier in Córdoba, Belgrano chalked up a 2-0 win over Gimnasia. El Pirata have struggled for goals this season and looked to be heading for another frustrating goalless draw until youngster Fabricio Brener drilled in an 82nd minute winner.

With Gimnasia pushing forward in search of an equaliser, Belgrano sealed victory in stoppage time with Juan Brunetta tapping in a second.