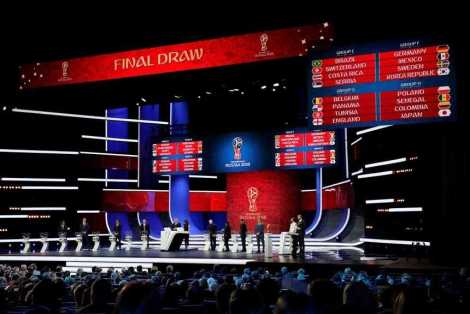 Lionel Messi’s breathtaking hat-trick against Ecuador which sealed a place in Russia already seems like a distant memory but Argentina’s World Cup dreams became a great deal more real on Friday with the tournament draw taking place in Moscow.

Among the top seeds, La Albiceleste were drawn in Group D, where they will face Croatia, Iceland and Nigeria.

Having avoided Spain or England, many in Argentina will be grateful that Jorge Sampaoli’s side didn’t get the toughest possible group but it was certainly not the easiest draw either.

Which game are you most looking forward to?! ??#WorldCupDraw pic.twitter.com/CYBTaqkgpF

Croatia may have arrived in Russia via the playoffs but still pose a considerable threat when looking at their talented side and the reason the Croats required that tie against Greece to progress was because they finished behind Iceland in UEFA qualifying.

The two will meet again and although minnows Iceland might be the smallest nation to reach the tournament, they proved in the European Championships they should not be underestimated.

And finally, Nigeria, the side who recently beat Argentina in a friendly in Russia. The Super Eagles qualified in impressive fashion from a difficult group containing Algeria, Cameroon and Zambia but have already given Sampaoli with plenty to think about.

5/6 – Nigeria will play their 6th World Cup, facing #Argentina for the fifth time; the South American side won all their WC duels. Custom. #WorldCupDraw https://t.co/66N7CflC1E

Argentina will begin their campaign against Iceland on June 16th in Moscow before travelling to Nizhny to play Croatia on the 21st and finishing against Nigeria in Saint Petersburg on the 26th,

If La Albiceleste can top the group then the runners up from Group C lie ahead. A group that consists of France, Australia, Peru and Denmark.

Jorge Sampaoli has a lot to do between now and June and knows his side must improve but the coach was also aware of the dangers that Group D presents.

“They are rivals who come with few obligations and a lot of enthusiasm, the World Cup gives them a unique opportunity, Iceland will fight, like everyone else.

“Croatia has an excellent midfield with Modric, Rakitic and Perisic. Also, Madzukic as a number nine. It is a very strong team.

“Nigeria is unpredictable. They are very quick. We were recently better than them in the first half but they came back for the result later and we will have to work hard against them.”