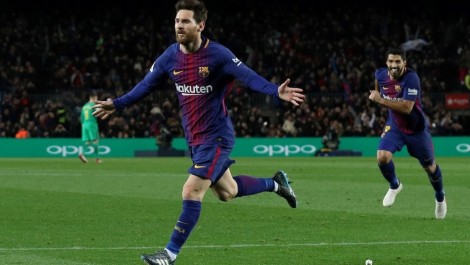 Lionel Messi took his league tally to twenty for the tenth consecutive season with a sensational late free-kick that earned Barcelona a 2-1 win over Alavés and ensured the Catalan giants remain eleven points clear of Atlético Madrid at the top of LaLiga.

John Guidetti gave Alavés a surprise lead midway through the first half after racing away on the counter to beat Marc-Andre ter Stegen.

Messi saw an earlier free-kick superbly saved by Fernando Pacheco but Alavés were unable to hold on and Luis Suárez volleyed an equaliser in the 72nd minute.

Having been frustrated all afternoon, Barcelona looked to heading towards two dropped points but five minutes from time, Messi struck a wonderful winner. Pacheco managed to get a hand to the free-kick that whipped over the wall from not far outside the box but was unable to keep it out, leaving Messi as Barcelona’s match winner once more.

In Serie A, Rodrigo Palacio headed Bologna into a shock lead away to Napoli but it lasted only minutes before the league leaders were level and eventual 3-1 winners.

The 35-year-old has been linked with a return to Argentina over the past couple of transfer windows but took his season tally to three in Naples.