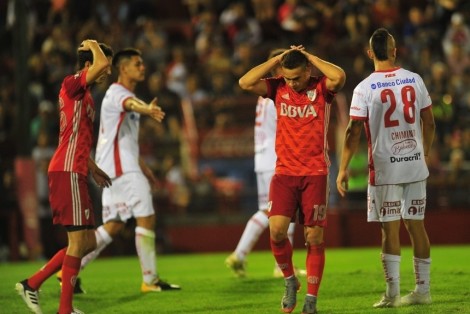 Marcelo Gallardo opted not to start any of his summer signings and instead keep faith with the side that defeated Boca Juniors last weekend but River Plate’s familiar problems from 2017 were still evident and Los Millonarios began the year with defeat away to Huracán.

Kickoff at the Estadio Tomás Adolfo Ducó was delayed by two hours after a bomb threat led to an evacuation but the delay did little to help River, who appeared flat throughout.

Ignacio Fernández and Enzo Pérez look out of sorts in the River midfield and the only clear chances that Gallardo’s side created fell to Colombian Rafael Santos Borré. The youngster received criticism for his performances last year but was given a reprieve after netting the only goal against Boca in last week’s friendly. However, after seeing a one-on-one effort smothered by Marcos Diaz in the first half, Santos Borré blazed over the game’s clearest chance in the second half.

Ultimately, the game was decided after half an hour when Gonzalo Montiel gave the slightest of tugs on the shirt of Ignacio Pussetto, prompting German Delfino to point to the spot and allowing Pussetto to slide in his fifth goal of the season.

Gallardo threw on record signing Lucas Pratto in place of the misfiring Santos Borré with a little over 20 minutes remaining but the Argentina striker could do little with the service provided and while the introduction of Rodrigo Mora following 259 days out provided reason to cheer, supporters will have been frustrated by another lacklustre display.

River sit in 19th and have taken six points from a possible 30 in the last ten Superliga fixtures. The new signings will improve Gallardo’s side but after a summer of reevaluation, there were little changes on show. Huracán may have had less than 30% possession but rarely looked stretched and are successfully moving themselves away from relegation, sitting fifth in the Superliga standings.

Meanwhile in Santa Fe, another of the grandes, featuring a record signing of their own, were undone by a spirited Unión side, who continue to impress this season.

Unlike Marcelo Gallardo, Racing Club’s new boss Eduardo Coudet was able to start several new faces but adding the talented Ricardo Centurión to the attack, Nery Domínguez to the midfield and the central defensive partnership of  Alejandro Donatti and Leonardo Sigali did little to stop Unión from taking all three points.

Racing actually took the lead in the Estadio 15 de Abril with Diego González heading in from Centurión’s corner but La Academia couldn’t hold onto their advantage.

This, despite Lucas Gamba missing one point-blank header and seeing a penalty saved by Juan Musso. Silvio Trucco pointed to the spot for a second time during the first half after a handball by Renzo Saravia and this time Franco Soldano equalised.

Unión continued to probe Racing and with 20 minutes remaining went ahead as Diego Zabala cut inside and beat Musso from just outside the penalty area.

Racing toiled in their attempts to get level but never really looked like finding a way past Nereo Fernéndez in the Unión goal and so while Coudet has plenty to mull over, El Tatengue climb to third.