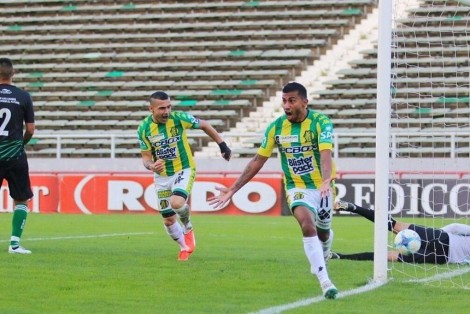 The Superliga may have failed to deliver much drama as far as the title race or relegation was concerned but Argentina’s second tier, the B Nacional has not disappointed and the final round of fixtures on Monday has left a title decider and produced a late dramatic relegation escape. 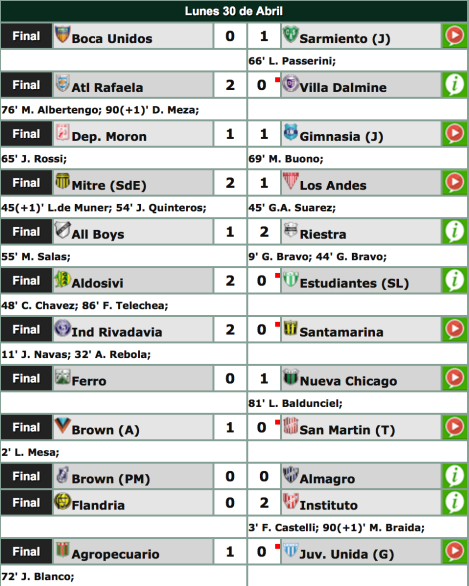 Victory for Almagro on the final day would have sealed the title and guaranteed the famous old club, managed by Boca Juniors icon Sebastián Battaglia, a place in the Superliga next season but a goalless draw away to Brown in Puerto Madryn saw Aldosivi draw level.

Aldosivi, looking for a swift return to the top flight, have led for much of the season but defeat to Riestra in their penultimate game had allowed Almagro to steal top spot. Needing victory on the final day, El Tiburón secured the points against already relegated Estudiantes de San Luís thanks to second half goals by Cristian Chávez and Fernando Telechea.

Level on points with Almagro at the top, the two will need to play a title decider at a neutral ground to be decided with the winner taking a place in the Superliga.

The loser of that decider will drop into the playoffs and take on ninth-placed Agropecuario. Jonathan Blanco’s sensational long range effort in the 72nd minute was enough for victory against Juventud Unida and with it Agropecuario leapfrogged Deportivo Morón and Gimnasia de Jujuy, who played out a 1-1 draw.

That defeat for Juventud Unida in conjunction with Nueva Chicago’s late win over Ferro Carril Oeste saw the Verdinegros escape relegation and instead send the team from Gualeguaychú down into the Torneo Federal A.

San Martín de Tucumán had third spot wrapped up so their defeat to fourth-placed Brown de Adrogué mattered very little and it means that San Martín face eighth-placed Villa Dálmine and Brown take on seventh Atlético de Rafaela. La Crema’s 2-0 win over Dálmine in Rafaela saw the change in positions and set up what look to be tightly contested playoff games.

Sarmiento will play Instituto in the final playoff game after El Verde defeated relegated Boca Unidos did likewise against Flandria.

The other big result from the final day was All Boys losing at the Estadio Islas Malvinas to already relegated Riestra. The defeat saw the historic club drop into the B Metropolitana as Independiente Rivadavia’s 2-0 win over Santamarina sealed All Boys’ fate.

The organisation of the title decider and the subsequent playoffs has yet to be decided but the B Nacional has more drama to serve up.