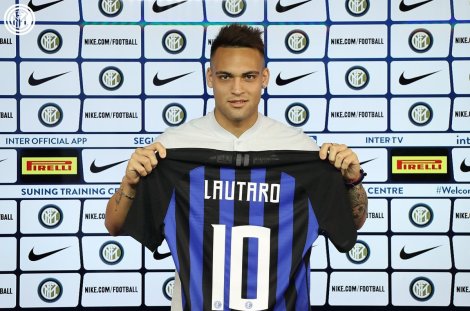 Departing Racing Club as one of the brightest prospects in world football comes with a weight of expectation but striker Lautaro Martínez shows no signs of the burden.

The 20-year-old was officially presented to the media at a press conference on Thursday and spoke confidently about the big money move and the famous shirt number he will be using this season.

“Wearing the number ten shirt doesn’t weigh on me because I already wore it at Racing,” Martínez explained,

“I asked the club to also have it here, it was free and I’m very happy to be able to wear it.”

After scoring 13 goals in 21 Superliga appearances, five in six Copa Libertadores games and making his Argentina debut in March, Martínez was not without options but was swayed by Inter’s project and the personal recommendation of Racing director of football Diego Milito.

“From the first moment that Inter came to Buenos Aires to speak with me, I was won over by the project. I loved the idea of playing here right from the start, having the trust of a coach like [Luciano] Spalletti was also influential.

“I hope to be able to make the most of my abilities to help the team.”

🎙| Lautaro: “I decided to put Lautaro on my shirt because it’s less common compared to my surname of Martinez. ‘El Toro’ is the nickname that I was given as soon as I arrived in Buenos Aires and it’s not changed.” #WelcomeLautaro #InterIsHere #FCIM pic.twitter.com/O36spgdHe2

Diego Simeone’s Atlético Madrid and even city rivals Real had been linked with the 20-year-old but Inter completed what could prove to be a bargain €22.7 million.

“I had contact with other clubs but when Inter came in, there were no doubts.

“I spoke a lot with Diego Milito who explained to me what it means to wear the Nerazzurri’s shirt and how important this club is. He made history in these colours, it’s now up to me to do well. It was also impressive to get to know a legend such as Javier Zanetti.”

Already settled in Italy, Martínez seems comfortable in his new surroundings and with his new teammates.

“The reception I received was great, how my teammates welcomed me was wonderful. There’s a great group here and we’re working hard with the coach to start the season in the best way possible.

“I’ll do my best to improve, to earn a starting spot and to help my teammates.

My first days went very well, the team has strong values and this atmosphere allows you to work at your best. Spalletti has very clear ideas so we all know what direction we must push in as we approach the challenges that await. To play in the Champions League is a dream come true, we’ll fight to do our best in it.”

Much has obviously been made of Martínez’s relationship with club captain and compatriot Mauro Icardi and whether or not the pair can play together.

An instinctive penalty box striker, there are certain similarities with Falcao but Martínez has shown enough at Racing to suggest he can compliment Icardi with time. The 20-year-old is comfortable drifting out wide and can easily turn provider when not scoring goals.

Certainly on a personal level the pair appear to have got off to a good start.

“My relationship with Icardi? I was already in touch with him, I thank him for all the interest he showed in my situation, he asked me right away if I needed anything.”

Martínez’s first season in Serie A will be closely followed in Argentina and while his transfer was a real coup for Inter, if the youngster can form a partnership with Icardi, Argentina could also be beneficaries.