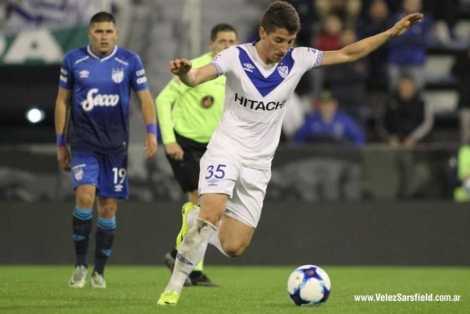 The conveyor belt of talent never seems to slow at Vélez Sarsfield but with the news that Santiago Cáseres is heading for Villarreal, the 21-year-old midfielder must avoid being another of those that fails to live up to expectations in Europe.

An outstanding season at the base of Gabriel Heinze’s midfield, Cáseres attracted plenty of interest but after links to several European clubs, Villarreal appear to have sealed a deal for around €10 million.

Vélez had been holding out for a figure of €8 million after tax for one of their prized academy product and with that now agreed, Cáseres is poised to sign a four-year deal with the La Liga outfit.

A slight injury had ruled the midfielder out of Vélez’s preseason friendly against Godoy Cruz this week but Cáseres spoke about the interest from Spain.

“Villarreal’s interest in me is real, but until it is all completed, I’m focused on Vélez and the goals we have, like the Copa Argentina,” Cáseres told Argentinian radio.

That deal is now all but complete and while the 21-year-old’s release clause of $15 million was never likely to be met Villarreal have been able to find an agreement, leaving Vélez with around €8 million to use primarily for finding a replacement for the recently departed, Mauro Zárate.

Cáseres though will be missed after becoming a regular under Gabriel Heinze last season – averaging almost 4 tackles per game, the 21-year-old is an busy ball winning presence in front of the defence but also an efficient passer, able to spring Vélez on the attack from deep.

With Maxi Romero sold to PSV seven months previously, Cáseres becomes the latest from a group of young players at the club who all impressed in the Superliga last season to progress. Nicolás Domínguez, Lucas Robertone, Nicolás Delgadillo, Francisco Ortega and particularly Matías Vargas have all left a mark and now time will tell to see when and if they follow the same path.

There has been no shortage from Vélez over the past few years but aside from Nicolás Otamendi all too many have failed to really go on to shine in Europe and provide genuine options for Argentina. Cáseres has all the tools to buck that trend and offer the national team qualities in midfield which are in desperate need of an injection of youth.