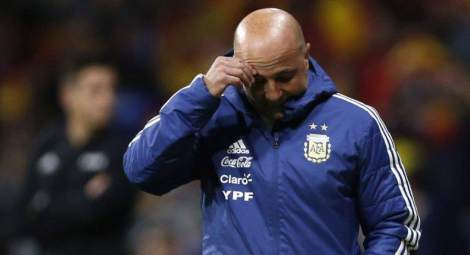 The ink may not yet be on the paper but Jorge Sampaoli has agreed to a $1.6 million compensation package with the Argentinian Football Association (AFA) and with it the 58-year-old’s disastrous year in charge of La Albiceleste comes to an end.

A woeful World Cup campaign saw Argentina win only once, Sampaoli never really decide on his best side or formation before eventually crashing out against France in the last 16.

AFA president Claudio Tapia and vice-president Daniel Angelici were reportedly unhappy with matters on and off the pitch in Russia but with a contract up until the World Cup in 2022, firing Sampaoli wasn’t easy.

A $20 million severance figure was reported but it is understood after the voluntary resignation of assistant Sebastián Beccacece and several other staff members, that sum was reduced to around $8.5 million.

However, for an organisation in such financial straits as the AFA even that made life difficult.

A series of meetings between Sampaoli and Tapia this week for a while looked as though it could give the under-fire coach a reprieve but the AFA were not pleased by Sampaoli’s refusal to take charge of the Under-20s at this month’s L’Alcúdia tournament in Spain.

With Beccacece already gone and installed as Defensa y Justicia manager, Sampaoli was supposed to take temporary charge of the Under-20s but after an initial agreement, the former Sevilla coach rejected the plan.

“Sampaoli is the Argentina coach, he has a contract,” Tapia told reporters after their meeting.

“He has to go to the ‘Alcúdia tournament. He has to go, he’s already appointed. The good men keep their word and he gave his word.”

With Sampaoli opting not to go, all that was left was for his lawyer, Fernando Baredes to meet with the AFA and agree on the financial package.

That figure would appear to be $1.6 million and on Monday when that is confirmed in writing, Sampaoli’s ill-fated 14-month reign will come to an end.

The Copa América winning coach took charge of 15 games, winning seven, and losing four and while qualification to the World Cup was secured and lifting the trophy in Russia always looked highly unlikely, there is still no questioning how much of a disappointment La Albiceleste were.

Four coaches in the four years since Alejandro Sabella guided Argentina to the World Cup final illustrate just how badly the AFA have run things and why the blame doesn’t fall squarely with Sampaoli.

However, ahead of next year’s Copa América and the road to Qatar 2022, the AFA are back in a familiar position — who can they afford and who would still want to take one of world football’s most precarious jobs?

One response to “Jorge Sampaoli agrees to Argentina exit”