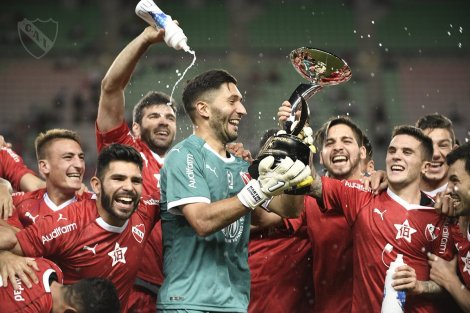 It may only be the Suruga Bank Championship but Independiente lifted their 18th official international trophy on Wednesday with victory over Cerezo Ozaka in Japan.

As winners of the Copa Sudamericana in 2017, Independiente travelled for the annual match against the J. League Cup winners and with the win over Cerezo were crowned new Suruga Bank champions.

Ariel Holan fielded two of his new signings in midfield, the impressive Pablo Hernández and Francisco Silva, and during the opening 45 minutes El Rojo were dominant.

Hernández had gone close with a free-kick as Independiente at times struggled to convert their possession into chances but after 27 minutes Silvio Romero broke the deadlock. The ball broke in behind the Cerezo defence and Romero calmly side-stepped goalkeeper Kenta Tanno to roll in the opener.

As the game went on Independiente sat back and invited pressure but barring one reaction save from a flicked on corner, Martín Campaña was not forced into a great deal of action.

Both sides made plenty of substitutions and Independiente gave minutes to other recent acquisitions Carlos Benavídez, Ezequiel Cerutti and Guillermo Burdisso as they managed to hold onto their narrow lead.

Independiente had previously lost against Jubilo Iwata in 2011 after being forced to penalties but claimed a 1-0 win to become the third Argentine club to lift the Suruga Bank Championship.