Ahead of Thursday’s colossal Libertadores clash between River and Racing, Jack Tilghman takes a look at ten players to have crossed the divide and played for both grandes…

The Superclasico between River Plate and Boca Juniors is undoubtedly Argentina’s most famous rivalry, but the oldest derby in Argentine football is actually River Plate against Racing, a contest that renews this week when the two former Intercontinental Cup Champions face off in the Copa Libertadores Round of 16.

The two giants of the South American game first squared off during the amateur era on the 13th of December 1908, with River seeing out a 2-1 victory. Racing’s directors however disputed the result and demanded a replay, only to see River wallop the Avellaneda side 7-0 two weeks later.

Since then, both clubs have seen many highs, as well as some lows, but in head to head match ups, River holds an overwhelming advantage, leading the all time series between the two by 48 games: 89 victories for the Millonarios, just 41 for La Academia, and 43 draws in Argentine league play in the professional era.

There is hope however for Racing fans: the last time these two sides met at this instance of the Libertadores, Racing knocked out River, then the defending champions, on penalties in 1997. River legend and captain Enzo Francescoli, currently the club’s director of football, missed his spot kick that night after having scored a sensation chip during normal time.

Like any two clubs who have been playing each other for nearly 110 years, Racing and River have shared many sensational players. This year’s Libertadores tie features various, with Racing fielding three River youth products in their ranks: midfielder Augusto Solari, defender Lucas Orban, who was shipped out to Tigre by former coach Matías Almeyda without much of a chance in the River first team, and forward Gustavo Bou, back on loan after a brief spell in Mexican football.

River on the hand has Racing academy graduate Bruno Zuculini, who serves as the back up to club captain Leonardo Ponzio. There is no room for any of them in our top 10, neither is there room for Reinaldo Mostaza Merlo. Though he is a legend for Racing supporters and has a statue at the club, Merlo was a one club man as a player, never having worn another shirt other than River, who he represented over 520 times. Another honorable mention goes out to Uruguayan forward Juan Ramon Carrasco.

The mustachioed Luque became world famous in Argentina’s 1978 World Cup triumph on home soil, scoring four goals along the way. As a club player, he is best known for his time at River, where he won five league titles and scored 75 goals, including this brilliant backheel: 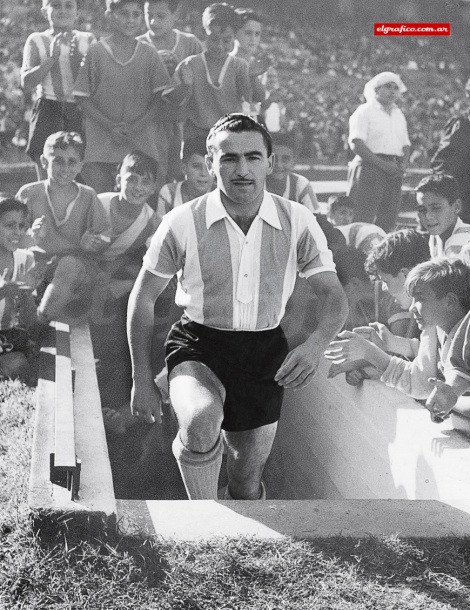 Best known for his time as coach of a Racing side dubbed el ‘Equipo de José’ that won the trifecta of Argentine League, Copa Libertadores, and Intercontinental Cup, Pizzutti also enjoyed a successful career as a player.

Coming through as a young striker at Banfield, he earned a move to River in 1951, where in one season he managed just seven goals in 30 games. He moved to Racing the following season, beginning what would be a long love affair with the light blue and white side of Avellaneda, though he would briefly play for Boca Juniors before rejoining Racing in 1956. All told, he won two league titles as a player for La Academia, before moving back to Boca in his final season before retirement.

The hero of Argentina’s run to the 1990 World Cup Final and a key man in Argentina’s back to back Copa America titles in 1991 and 1993, el Vasco’s time at club level was not as distinguished, but he did perform well for both Racing and River during a well travelled career.

Goyco came through at River in the early 80s, winning the treble in 1986: Argentine League, Copa Libertadores, and Intercontinental Cup, serving as Nery Pumpido’s backup. His strong displays when debutizing for Pumpido took him to Colombia to play for Millonarios, only to return to Argentina with Racing in 1990 after his breakout performance for the national side in Italy. In 1993, he moved back to River, finally lifting a trophy as a starter, helping the Millonarios to an undefeated season in the 1993 Apertura under Daniel Passarella.

A brilliant forward, Onega has often been overshadowed by other greats at River, mainly due to the fact that he played for the club during the bleak 18 year trophy-less spell. Although he never lifted silverware, Onega is still the club’s all-time top scorer in international competitions, with 31. Daniel also has the distinction along with his brother Ermindo, as being the only pair of siblings to both net over 100 goals for the club.

After leaving River in 1971, moving to Racing where he scored 9 goals in 41 appearances, before moving back to River in 1973.

A controversial figure off the field for both Racing and River, the Colombian striker always proved his worth between the white lines. He finished as top scorer in Argentina during the 2011 Clausura, his first tournament at Racing, but was later forced to leave the Avellaneda side after he allegedly threatened teammates with a paintball gun.

After a time in Mexico with Cruz Azul, the Barranquilla native returned to Argentina with River, where he was a key man as they won the league title, Copa Sudamericana, and Recopa Sudamericana during his two years at the club. Just for good measure, Teo also left River on bad terms as he forced a move to Sporting Clube de Portugal, just after his best match for the club, a 3-0 win over Brazilian giants Cruzeiro in Bello Horizonte. His departure meant he missed the Semifinals and Final as River went on to be crowned champions.

El Mencho began his career with Racing after coming through the youth ranks at La Academia, making his debut against none other than his future club River in El Monumental, scoring a long range strike from outside of the area. He went on to help Racing end their long international trophy-less streak in 1988 by winning the Supercopa Sudamericana.

The following year he was transferred to River, where he would win a host of trophies at the domestic and international level (including a Copa América with Argentina in 1991). He would win the 1990 Primera Division, 1991 Clausura, and 1993 Apertura tournaments before moving to Japan. Despite playing in the far east, Bello still earned himself a spot in Argentina’s 1994 World Cup squad, before returing to River at the end of 1995. Although his second spell at River saw him play a more limited role with the likes of Enzo Francescoli, Hernan Crespo, and Marcelo Salas occupying the forward positions, he was part of the squads that won the 1996 Copa Libertadores and 1997 Supercopa and various league titles.

Well know these days for his work on ESPN, Wolff enjoyed a spectacular career for both Racing and River in Argentina as well as La Palmas and Real Madrid in Spain while also playing for Argentina in the 1974 World Cup. Wolff turned down the first chance to be called up to the Racing senior side by Juan José Pizzutti, stating he wanted to finish his education first.

When he did indeed finish secondary school, he was brought up to play with many of the squad who had beaten Celtic for the Intercontinental Cup. In 165 games, he netted an impressive 31 goals from his right back postion for Racing, drawing the attention of River who brought him to Nuñez in 1973. In one season for the Millonarios, he played 37 times netting six goals and earning his spot in Argentina’s World Cup Squad. His time in Spain would be fruitful, especially with Real Madrid with whom Quique won a pair of league titles.

A World Cup winner with Argentina in 1986, el Vasco was in the news as he took charge of the Albiceleste’s disastrous campaign at the Rio Olympics in 2016 after coach Gerardo Martino resigned and numerous clubs refused to release players. As a domestic player, Olarticoechea was famous for his time not only with both River and Racing, but also Boca Juniors.

Born in Saladillo, a city better known for raising horses and cattle than football, el Vasco came up through the ranks in Racing in the late 1970’s as a defender and midfielder, playing a number of different roles. In 1981, he moved to River where he won the 1981 Nacional tournament in a squad made up of all-time greats such as Mario Kempes, Daniel Passarella, Norberto Alonso, Ubaldo Fillol, amongst others. In 1988, he returned to Racing as a World Champion, and returned to Argentina’s World Cup squad in 1990, his third. In the semifinal against hosts Italy, el Vasco found Claudio Caniggia with a perfect cross for Argetnina’s equalizer and also made a penalty in the shootout. He missed the Final due to yellow card accumulation. Argentina never lost a World Cup match in which he played.

Rated by many as the greatest Argentine goalkeeper of all-time, Fillol may best be known for his heroics in the 1978 World Cup, but he is also one of the few players to be a true legend for both Racing and River. El Pato started his career at Quilmes before moving to Racing in 1971, where he spent two years and drew the attention of River, who brought him to Nuñez in 1974. His time with the Millonarios was undoubtedly the best spell of his career, playing over 400 matches, winning seven league titles, being named Argentine Footballer of the year in 1977.

After a spell in Brazil with Flamengo and Spain with Atlético Madrid, Fillol returned to Racing in 1986. Two years later, he captained the Avellaneda outfit to the Supercopa Sudamericana title, the club’s first international trophy since the Intercontintal Cup 21 years earlier.

Like Wolff, Perfumo is perhaps best known to the younger generation for his work on ESPN, but as a player in the ‘60s and ‘70s, el Mariscal was one of the best central defenders in the world.

Born in Sarandí, a part of the Avellaneda municipality, Perfumo came through the ranks at Racing where he helped them win the Argentine league in 1966, forming a central defensive partnership with his life long friend Alfio Basile. A year later, he led them to the Copa Libertadores title, followed by Intercontinental Cup glory against Celtic, becoming the first Argentine club to be World Champion (later recognized be FIFA).

Perfumo then moved to Brazil, to play with Cruzeiro, only to return to Argentina in 1975, this time with River. At the time, River had gone 18 years without a trophy, but with Perfumo as a key man in central defense alongside Daniel Passarella, he not only helped them break the long dry run, but managed three league titles in four years before retiring. Brilliant in the air, on the ball, and a sensation striker of free kicks, Perfumo passed away in March 2016, yet his contributions to Racing, River, and the Argentine National Team (he appeared in two World Cups, serving as captain in 1974) will live on forever.