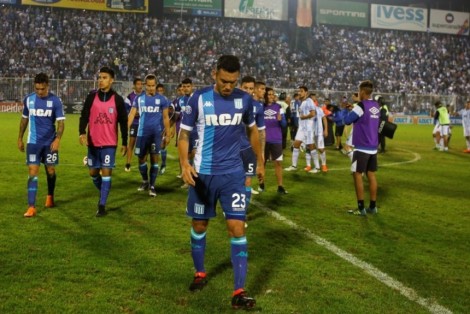 For 45 minutes Racing Club looked in control and having pulled into a two-goal lead the points looked to be heading back to Avellaneda but a complete turnaround after the break saw Atlético Tucumán not only pull level but almost snatch it at the death.

Much was made of the absence of Ricardo Centurión from the Racing starting eleven and while a slight injury was cited prior to kick-off, Eduardo Coudet’s admission that the forward was healthy and simply left out has sparked rumours of further off-field problems.

However, La Academia hardly looked as though they missed the troublesome but wildly talented Centurión as they comfortably deserved their first half lead.

Matías Zaracho had already hit the crossbar when Lisandro López curled in a superb opener after 27 minutes and when Gustavo Bou tapped in a second on the counter soon after the visitors were cruising.

However, Ricardo Zielinski tinkered at the break and from then on his Atlético side had Racing rattled.

Guillermo Acosta’s deflected effort pulled a goal back with a little over 20 minutes remaining and four minutes from time David Barbona equalised with a bouncing volley from distance.

Centre forward Leandro Díaz had already blazed one clear chance wide and in stoppage time missed a glorious opportunity to win it. Luis Rodríguez knocked the ball down and the number nine had only Gabriel Arias to beat from seven yards out but managed to bounce the ball over the bar.

Atlético will still take the point in the circumstances and after their Copa Libertadores first leg are enjoying a good start to the season while Racing still look some way short of their full potential.