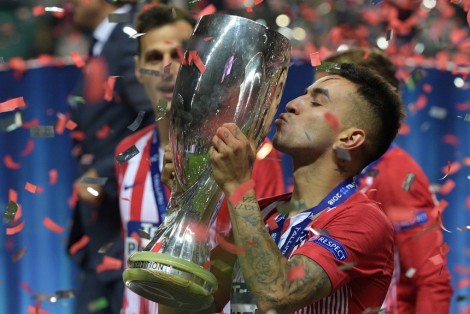 Atlético Madrid need no further proof of just how good a coach Diego Simeone is but forward Ángel Correa has been something of an elusive talent during his four years in Spain.

However, the pair celebrated victory over city rivals Real Madrid to lift the UEFA Super Cup on Wednesday and while Simeone entered the record books with his seventh major trophy at the club, Correa signalled that this season could be the year the 23-year-old finally realises his enormous potential.

Diego Costa had given Atleti the lead inside a minute but Real fired back with Karim Benzema heading an equaliser and Sergio Ramos tucking away a penalty just after the hour mark.

Real, who beat Atleti in the 2014 and 2016 Champions League finals, looked like they were going to edge their bitter rivals once again but the introduction of Correa changed the game.

Pace, trickery and an energy that can lift a side, the former San Lorenzo forward was alert in the penalty area to get to the byline and pull the ball back for Costa to equalise 12 minutes from time.

Real had chances to win it but with the game in extra-time, Atlético eventually took control.

Saúl Ñíguez smashed in a stunning third and fellow academy product Koke secured the victory shortly after with a fourth.

Atleti are serious contenders in all competitions and Diego Simeone has never had such a talented squad to work with. There are options in every position but the performance by Correa from the bench provided plenty of food for thought not only for El Cholo but for Argentina.

No one who had watched Correa dazzle at San Lorenzo or stand head and shoulders above every other player for Argentina Under 20s would question the player’s talent but after his career threatening heart surgery and slow start in Spain, there were those who doubted if Angelito would be the star that he had promised to be.

A bit-part role in Simeone’s Atleti side only produced flashes but even that is worth considering in a different light considering how many players struggle to make any impact under the intense demands of Cholo.

However, the past year has only seen Correa’s influence grow and even if from the bench, the Argentine forward could be a genuine game-changer for Atleti as he proved against Real.

7 – Diego Simeone has won seven trophies as Atletico manager, the most in the history of the club:

Diego Simeone is entering perhaps the most exciting period of his tenure in charge of Atlético and so any pipe-dreams of the 48-year-old taking over the vacant Argentina coaching job are just that.

“He still likes the day-to-day work and the adrenaline of Sundays and with the national team he does not have that.”

Simeone’s time may come at some point in the future but Correa can play an important role.

A regular in Gerardo Martino’s squad despite his tender years, Correa hasn’t been involved with Argentina for over a year but with many of the old guard now making way there has never been a better time for the 23-year-old to renew his claim.

Dynamic and hard working, Correa also brings a versatility to play almost anywhere across the attack and has even been floated as a possible wing-back option previously and so Lionel Scaloni and whoever is selected as the Argentina permanent coach could do much worse than take a long look at Angelito.