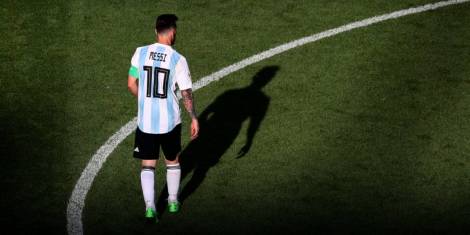 Uncertainty looms over Argentina. More than six weeks have passed since Kylian Mbappe and eventual World Cup winners France tore La Albiceleste apart and there is still no clear direction of where the national team goes from here.

Javier Mascherano and Lucas Biglia confirmed their retirements from the international stage and a few more of the old guard may well drift into the background but while the AFA ponder over the permanent successor to Jorge Sampaoli, captain Lionel Messi has requested a reprieve.

Few could blame the Barcelona star after shouldering the burden of the nation, Messi wants to see what the AFA do next before deciding whether he wants to put himself through the emotional strain of pulling on the national shirt.

So for now, interim coach Lionel Scaloni and his assistant Pablo Aimar prepare a fresh squad ahead of two September friendlies against Guatemala and Colombia in the United States.

That will be announced in the coming days but an Argentina squad without Messi, Mascherano, Angel Di María, Gonzalo Higuaín or Sergio Agüero ushers in a new era, even if the door isn’t closed on all those mentioned and if these fixtures are only friendlies.

What was the oldest average squad in Russia will long overdue be given a major injection of youth and for all of Argentina’s failings at these levels, there are reasons for optimism. For nothing else, there is a refreshing sense of change.

According to reports Scaloni is contractually obliged to selected a number of those that were at the World Cup but if that is the case, those set to be named are among the few that should be looked at again and could still have a future for La Albiceleste.

Juventus star Paulo Dybala despite not featuring at the World Cup will likely fill the void left by Messi, Nicolás Tagliafico remains the best option at left-back, Franco Armani may not have shown his best in Russia but the River Plate number one is certainly one of the best three goalkeepers the country has to offer at present, and while Gabriel Mercado is the wrong side of 30, Marcos Acuña, Giovani Lo Celso, Maxi Meza and Cristian Pavón all have what should be their best years ahead.

So with those names still included, Scaloni can turn to a group of players perhaps unfortunate to miss out on Russia, who may have featured already for Argentina but who were overlooked to provide one last roll of the dice for the older generation.

Mauro Icardi looks finally set to make a serious challenge for the Argentina number nine shirt and after years of talk about the Messi friends club, the Inter captain can aim to bring his prolific club scoring ability to the international scene. The 25-year-old has been continuously overlooked for the past couple of years and aside from a fleeting trial under Jorge Sampaoli has never been given a chance.

Now is that time and Icardi may well be paired with his new Inter teammate Lautaro Martínez. One of the most exciting prospects in world football, the 20-year-old was something of a wildcard pick for Sampaoli but eventually missed out on the 23-man World Cup squad. However, a blistering start to preseason with Inter has supporters in Italy excited and should open the door to an extended run with La Albiceleste.

Additionally opportunities for a return for Ángel Correa are abundant now after the Atlético Madrid forward fell down the pecking order over the past year. The former Under-20 captain has worked his way into being an important part of Diego Simeone’s squad and provides an energy and versatility that few can match and this fresh start is also likely to bring recalls for classy defensive midfielder Leandro Paredes, attacking full-back Fabricio Bustos, centre backs Germán Pezzella and Ramiro Funes Mori and for goalkeeper Gerónimo Rulli.

Just one possible XI from this group of players

Most of those just mentioned would have been many supporters’ World Cup squads but now is the time for Argentina to bring through a number of new faces.

With Javier Mascherano and Lucas Biglia now gone, Argentina need a new ball-winning number five and there appears no better candidate than Santiago Ascacibar. The 21-year-old Stuttgart midfielder has a year of Bundesliga experience under his belt, signed a contract extension at the club and is now primed to be tested internationally.

Elsewhere in the midfield, Sevilla playmaker Franco Vázquez could finally make his debut after previously representing Italy but opting since to play for the country of his birth, Benfica’s Franco Cervi could get a call and River Plate duo Gonzalo Martínez and Exequiel Palacios have been watched closely by Scaloni.

Giovanni Simeone, the prolific partner of Angel Correa in the Under-20s could make his senior bow after impressing with Fiorentina, and if Juan Foyth shakes off a knee injury the Tottenham defender may also make the step up.

However, Scaloni is taking a keen interest on young players currently in the Superliga and so aside from the likes of Maxi Meza, Fabricio Bustos and Pity Martínez already mentioned and plying their trades in Argentina, there could be a couple more exciting additions.

Vélez Sarsfield playmaker Matías Vargas is tipped for his first call up after an outstanding campaign last year and a bright start this time round. The 21-year-old was second only to Pavón last season for assists and with his quick feet and eye for a pass, El Monito has picked up this term where he left off.

And Independiente’s powerful centre back Alan Franco could also be included. Boca’s Lisandro Magallán has been watched and there has even been suggestions that recent under-20 COTIF champion Leonardo Balerdi might get a chance but Franco should certainly be seen as ahead of both after his impressive displays.

The 21-year-old was a key part of an Independiente defence that conceded the fewest goals last season and after recent interest from Villarreal signed a new deal with El Rojo with a release clause of $20 million.

Scaloni’s first Argentina squad is expected to have the majority of these players and the chance to see this new crop come through provides fresh reasons to watch.