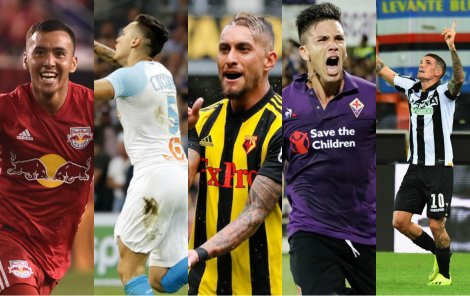 Many of the usual suspects weren’t on target over the weekend but that still didn’t prevent plenty of Argentinos finding the net around the globe.

Roberto Pereyra continues to stake his claim for a recall to the Argentina squad with another goal in what has been a tremendous start to the season for Tucu and Watford.

The Hornets probably haven’t always seen the best of the 27-year-old since he signed from Juventus for €13 million two years go but with three goals in as many games this campaign, Pereyra is in arguably the best form of his career.

Roberto Pereyra has been directly involved in each of Watford’s last seven Premier League goals at home:

A wonderful curling finish against Crystal Palace at the weekend, the former River Plate midfielder has been directly involved in each of Watford’s last seven Premier League goals at Vicarage Road.

Elsewhere in the Premier League, Luciano Vietto made a hugely promising first start for Fulham as the Cottagers defeated Burnley 4-2.

Tireless work in the Fulham attack, Vietto chalked up two assists but made five key passes in a busy performance alongside Alexsander Mitrovic and Andre Schürrle.

In the tier below, Marcelo Bielsa’s Leeds United bounced back from their first dropped points of the season with a convincing 3-0 win over Norwich.

The midweek draw saw Leeds off top spot but the superb display on Satuday put Bielsa’s boys back at the summit of the Championship.

Across the Channel in France, Lucas Ocampos scored his first of the season as Marseille fought back from two-down to claim a point against Rennes at the Stade Vélodrome.

A strong season on the south coast last time out, Ocampos could force his way into Argentina reckoning and while Marseille have started poorly it was the 24-year-old’s scrappy goal that kickstarted the comeback.

A regular goal scorer in Ligue 1, Emiliano Sala got his second of the season to salvage a late draw against Caen.

The 27-year-old, who had been linked with a move away from Nantes this season, sent the goalkeeper the wrong way from the penalty spot with ten minutes remianing to earn a point.

Angel Di Maria wasn’t at his best but still chalked up his third assist of the season as Paris Saint-Germain maintained their perfect start to the season with a 3-1 win over Angers.

While most of those mentioned are still hoping to break into the Argentina squad, Giovanni Simeone was named in Lionel Scaloni’s group for the September friendlies and celebrated with a goal in Fiorentina’s 6-1 win over Chievo.

In front of father Diego, the 23-year-old forward capped off a fine display with Fiorentina’s sixth in stoppage.

Rodrigo de Paul was also on target as Udinese edged Sampdoria and while the former Racing Club midfielder may never have reached the heights predicted when he was a teenager, de Paul has grown into his position at Udinese.

The 24-year-old cut inside onto his right foot to find the bottom corner after only nine minutes and that was enough for the Zebrette to take all three points.

Meanwhile, Inter’s underwhelming start to the season continued and even after Mauro Icardi had crossed for Ivan Perisic to give an early lead and that was subsequently doubled, Torino still left the San Siro with a point.

In Greece, Ezequiel Ponce got up and running with a goal in AEK’s 2-0 opening weekend win over Giannina.

The 21-year-old swept in a low cross from the right to open the scoring and with a regular run in a team could gain some valuable experience in Europe.

He might have opted to represent Paraguay but former Argentina under-20 international Alejandro Romero Gamarra has proved a real hit in the United States and on Sunday gave New York Red Bulls victory over rivals DC United.

The talented 23-year-old rifled the ball into the bottom corner from outside the penalty area just before the hour mark to earn the victory.

Once honoured as the most talented teenager in Argentina, Kaku needed the move from Huracán and although not coming cheap, the Paraguayan international has hit the ground running in Major League Soccer.

The Red Bulls trail only Gerardo Martino’s Atlanta United in the Eastern Conference after The Five Stripes managed to defeat Orlando City.

Josef Martinez continuing to find the net and break records obviously hogs the limelight but before the Venezuelan’s winner on Friday, Leandro González Pírez had bundled Atlanta ahead.

The 26-year-old has been an understated but important signing for Tata’s side and the defender was alert to pounce on Ezequiel Barco’s spilled free-kick.

Although not on the scoresheet this week, Lucas Janson maintained his impressive start to life in Toronto. With only a few games remaining, the forward has had to make an immediate impact in the MLS and after his first goal last week, Janson played an important part in Toronto’s 3-1 win over rivals Montreal Impact.

The 24-year-old was always involved in Toronto’s attacking play and slipped in Jonathan Osorio for the third before the half hour mark.

Former Lanús forward Alejandro Silva pulled a goal back but Janson and Toronto will now be hoping to put together a run and nick a playoff spot.

And finally in Liga MX, Mauro Boselli secured a victory for Club León away to Toluca. After going behind early León came back and in first half stoppage time Boselli smashed the ball into the roof of the net after pouncing on a rebound.