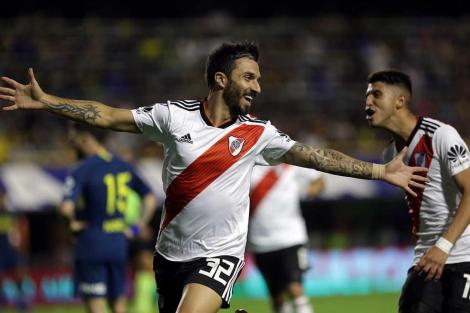 The latest instalment in Argentine football’s marquee fixture may not have been a classic but it was settled by two superb strikes worthy of winning any game. Boca Juniors and River Plate locked horns once more in La Bombonera and goals by Gonzalo Martínez and Ignacio Scocco handed Los Millonarios another famous victory.

Much was made in the build-up of Boca’s enforced change in goal following the broken jaw suffered by Esteban Andrada in the Copa Libertadores but there was little that under pressure stand-in Agustín Rossi could do about the two volleys that whistled past him in each half.

Other than a Darío Benedetto effort that was tipped over by Franco Armani, Boca started sluggishly and it was instead River who dealt the initial blow in the contest. Exequiel Palacios drove towards the Boca penalty area and when Emmanuel Mas’ attempted clearance ballooned up into the air, Gonzalo Martínez watched it onto his left boot before flashing it back across Rossi and inside the far post.

Argentina international Martínez was enjoying himself out on the Bombonera turf but shortly after dealing Leonardo Jara a nutmeg the midfielder was forced off through injury.

Even with this boost, Boca struggled to get going and were fortunate to go into half time with the situation no worse after substitute Edwin Cardona was lucky not to see red following an elbow to Enzo Pérez’s face minutes after coming on.

The Superliga champions did improve after the break and two strong penalty shouts, an off-target Benedetto scissor kick and another possible spot kick when Milton Casco bundled over Cristian Pavón were all evidence of the tide turning.

However, unable to find an equaliser, Boca were punished by yet another sumptuous strike. Substitute Ignacio Scocco had only been on the pitch five minutes and barely touched the ball when he hammered a half volley in off the underside of the bar.

Two goals down Boca failed to react and instead a series of petulant fouls allowed River to count down the clock with relative ease. Only in the closing stages did Mauro Zárate flash a shot over the top, Carlos Izquierdoz head against the bar and Franco Armani produce a superb diving save to keep Boca out.

Boca may well point to the penalty decisions given against them at the start of the second half but in truth Guillermo Barros Schelotto’s side were desperately disappointing. River frustrated their rivals, defended well and broke efficiently to nick the points, climb above Boca into fourth and extend their unbeaten run to an impressive 29.