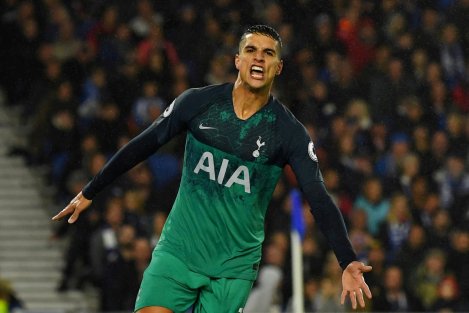 Argentinians had a very active Saturday in the Premier League. The Albiceleste contingent were key parts in securing points for their respective teams throughout England. The weekend started off in Craven Cottage with Fulham taking on unbeaten side, Watford.

Luciano Vietto and Fulham FC played in a tightly contested game. Vietto who is on loan at Fulham this season played the full 90 minutes and took part in the game tying goal in the 78th minute. Vietto won the ball in the air inside of the box and sent a low driven cross that was put into the back of the net by Aleksandar Mitrovic to give Fulham a crucial point.

Over in Wales, Sergio Agüero who recently signed a new contract with Manchester City opened up the scoring with a 32nd minute strike off of a Bernardo Silva ball in the box. Agüero played 61 minutes for Manchester City in a 5-0 rout over newly promoted side Cardiff City. On his 300th appearance for City it was the former Independiente striker’s 205th goal.

On Saturday’s last fixture, Erik Lamela came on as a substitute at the AMEX Stadium against Brighton. Lamela came on to the pitch in the 68th minute for Son Heung-min. The winger made an immediate impact in the attack, coming up huge for Spurs with a 76th minute goal off of a beautiful ball in from Danny Rose. The Lamela goal proved to be the decisive one giving Tottenham the win over Brighton.

Over in La Liga, Lionel Messi continued his scoring form on Sunday in the Catalan Derby. Messi and his teammates pressured Girona in the attack to start the game. In the 19th minute, the pressure paid off with a Messi goal coming inside the box from a Vidal driven ball through Girona’s defense.

Barcelona went down a man in the 35th minute, Clement Lenglet was sent off after a controversial call on an elbow that to some looked to be unintentional. Girona was able to take advantage of the extra man scoring in the 45th minute and getting a point from Barcelona who remain at the top of the table.

Elsewhere in Spain, Jonathan Calleri contributed to a 5-1 rout over Rayo Vallecano. The goal gave Calleri his first of the season as Alaves were able to take advantage of being a man up scoring three goals in the second half.

In Portugal, Benfica took on Aves in league play. Eduardo Salvio and Franco Cervi both featured for the Portuguese league leaders. Salvio was subbed out in 72nd minute as Benfica looked to secure the lead. Cervi subbed on in the 54th minute and scored the goal that sealed the game in the 62nd minute.

Angel Di Maria was the only Argentinian in France to get on the scoresheet. The Albiceleste winger scored the game tying goal in the 45th minute for Paris Saint Germain. Di Maria now has 3 goals and 3 assists in 6 matches for PSG this season. His strike from outside of the box changed the trajectory of the match as PSG went on to beat Rennes 3-1.

In Italy, Argentinians featured heavily in Sunday’s games. In an early afternoon matchup, Rodrigo De Paul opened up the scoring for Udinese with a screamer from way outside of the box taking Chievo’s keeper by surprise. De Paul ended his day with a 90th minute assist to Lasagna to seal the 2-0 victory for Udinese. Four goals already for the season for the Racing academy product, by far and away his best spell in Italy.

In the early evening match, Argentinians scored all but one of the goals as AC Milan took on Atlanta at San Siro.

Milan’s big summer signing, Gonzalo Higuaín opened up the scoring in the second minute with a wonderfully taken volley, giving the Argentinian his first San Siro goal. In the 54th minute Alejandro Papu Gómez scored an equalizer. Minutes later, AC Milan once again took the lead off a Bonaventura goal. Emiliano Rigoni who came on at halftime was the hero for Atalanta scoring in stoppage time to tie up the game and giving Atalanta a point.

In Russia, league leaders Zenit Saint Petersburg took on Lokomotiv Moscow in a high scoring affair. 2 young Albiceleste stars had big games for the Russian giants. Leandro Paredes had 2 assists in the game while Sebastián Driussi scored a goal in the 90th minute to seal a 5 to 3 victory for Zenit.