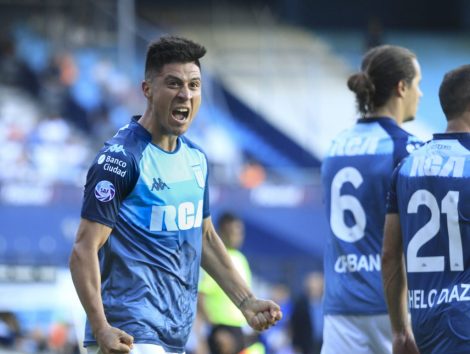 Another full round of fixtures in the Superliga saw the league leaders move clear at the top but two surprise contenders are trying to keep pace as the grandes have work to do. In case you missed any of the games and goals, here is a quick rundown plus the updated league tables.

It was far from Racing Club’s best performance and Newell’s Old Boys may feel they did enough to grab what would have been a tremendous point for the struggling visitors but ultimately Jonathan Cristaldo’s first half header was enough.

La Academia moved seven points clear on Sunday evening with that win but found themselves pegged back to five on Monday after unbeaten Defensa y Justicia chalked up a 3-2 win over Vélez.

The Copa Sudamericana disappoint already looked to have been put to the back of Sebastián Beccacece’s mind and his side came from behind to edge past a spirited Vélez side. 17-year-old Thiago Almada on his first start for Vélez scored twice but it wasn’t enough as Paraguayan Matías Rojas grabbed a decisive brace of his own.

Shortly after on Monday, Huracán moved third with a scrappy victory against Lanús thanks to a fortunate Nicolás Thaller own goal. While El Globo have eyes on the summit, relegation remains a real threat for Lanús.

There is no avoiding the biggest story in Argentina as the world prepares for the Superclásico Copa Libertadores final but both Boca Juniors and River Plate had Superliga fixtures to get out of the way first with mixed results.

Boca came from behind in La Bombonera to brush aside Tigre 4-1 thanks to a Carlos Tevez brace and further goals by Edwin Cardona and Julio Buffarini while River slipped to a 1-0 defeat against Estudiantes. Gastón Fernández’s deflected free-kick sealed the points but perhaps of greater concern for Marcelo Gallardo was a calf injury to Ignacio Scocco that may rule the striker out of the Copa Libertadores first leg.

Independiente bounced back from their defeat last week to secure a valuable three points even if it were not a convincing performance. The Superliga’s leading scorer Emmanuel Gigliotti scored another brace to take his tally to eleven goals in ten games and El Rojo playing their game in-hand in midweek could yet climb into the top four.

The remaining grande, San Lorenzo, appointed Jorge Almirón this week and are in need of a lift after slumping to defeat against Talleres. Boca loanee Gonzalo Maroni’s stunner handed La T the points in the Nuevo Gasómetro and now Almirón has to hope some of his magic from Lanús can revitalise what remains a decent group of players.

And in the promedio there were significant results as Belgrano jumped out of the drop zone at the expense of San Martín de San Juan. El Pirata secured a 2-0 win against fellow relegation candidates Gimnasia while San Martín de San Juan travelled to Tucumán to face their namesakes and were handed a damaging defeat.

San Martín de Tucumán climbed off the foot with that win at the expense of Tigre, who had lost to Boca, and with Patronato drawing 2-2 with Unión, those four clubs make up what is an increasingly tight relegation battle.