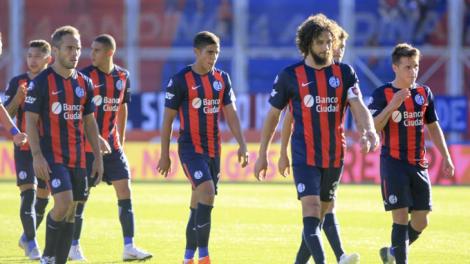 With only two wins all season and a defence that continues to leak goals there was never likely to be a quick fix for Jorge Almirón at San Lorenzo and although his debut draw against Vélez provided reason for optimism, Sunday’s home defeat to Atlético Tucumán only served to strengthen that view.

That is not to say that San Lorenzo were outclassed by their confident visitors but lacking the quality going forward and attempting to make El Ciclón more organised defensively reduced Almirón’s side to threatening for the most part from distance.

And there was certainly an element of misfortune to how San Lorenzo went behind. Captain Fabricio Coloccini’s sliding attempt to cut out a cross saw the ball hit his arm, despite being it being tucked in close to the former Argentina international’s body, and after referee Ariel Penel pointed to the spot, Luis Rodríguez managed to just about sneak his penalty past Nicolás Navarro.

While the opener owed much to luck, Atlético’s second was a moment of class. Full-back José San Román cut back outside away from a challenge and rifled a low shot into the bottom corner from outside the penalty box to give the visitors a comfortable lead.

Rubén Botta and Nicolás Reniero both wasted good chances in the second half as San Lorenzo looked for a way back into the game but unable to find a way past Cristian Lucchetti it was another disappointing defeat for the vocal support at the Nuevo Gasómetro.

As San Lorenzo slip to 21st in the table, Atlético Tucumán climb into second, only four points off leaders Racing Club.

Later in Florencio Varela, Defensa y Justicia and Estudiantes finally reconvened after a storm had called off their meeting midway through the first half back in September. A goal apiece in that early exchange had left the game finely balanced and despite Alexander Barboza’s complaints that the visitors returned unwilling to risk that point, El Pincha held firm.

If high flying Defensa y Justicia had started on the front foot that only became more pronounced when Estudiantes saw Mariano Pavone sent off before half time.

The home side continued to come forward but were unable to find a way past Mariano Andújar and even after Rodrigo Braña was shown a second yellow card, Estudiantes’ nine men managed to see out the draw.

Still unbeaten Defensa y Justicia remain up in fourth but after two consecutive draws El Halcón have lost a little ground on the leaders and with only one game in-hand remaining, Sebastián Beccacece’s side would be three points off the pace.